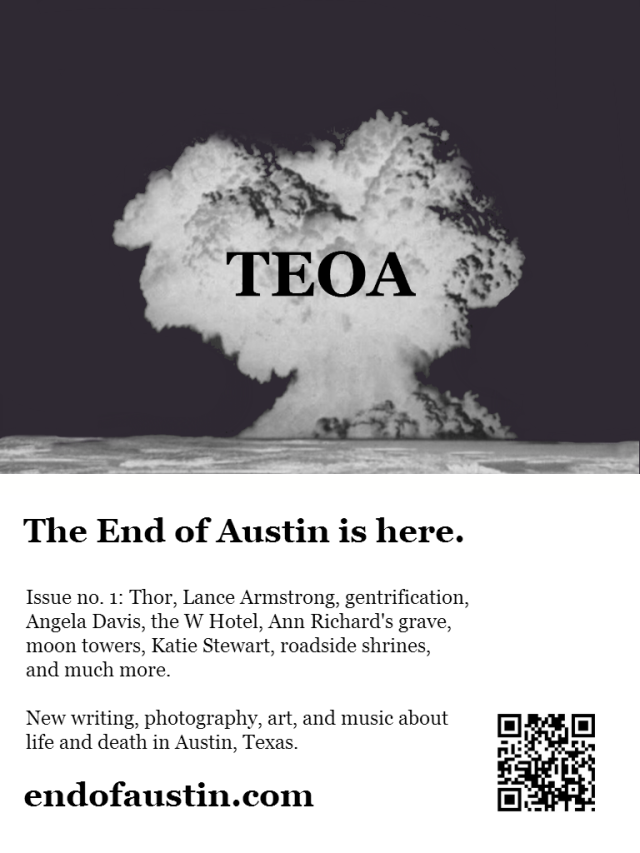 Back in October 2012, we posted a call for contributors to The End of Austin, a digital humanities project spearheaded by American Studies faculty member Dr. Randy Lewis and a small group of graduate students. We’re pleased to share the news today that the site has officially launched with sixteen fascinating submissions from movers and shakers in the Austin community.

At once a testament to the city’s seductive appeal and its anxious growth, The End of Austin addresses our perpetual concern with Austin’s past and present. Says Lewis, “Austinites are always afraid of losing what we love about the city: the vibe of a particular neighborhood, the murmur of the so-called creative class, the beauty and health of Barton Springs. The end of Austin, or at least some beloved facet of it, always seems around the corner.” The stories about these endings told at The End of Austin take the form of a variety of media: music, photography, fiction, nonfiction, sound, animation, and everything in between.

Carrie Andersen, a doctoral student in the department and member of the editorial board, notes, “Compared to other places I’ve lived in within the past ten years, Austin is remarkably and self-consciously lovely, weird, and anxious about its morphing identity, so I’ve been thrilled to learn more about the city through the work of residents past and present. And it’s so exciting that so many rich and evocative stories have found their home at The End of Austin, particularly since a central goal was to provide an open and accessible space for different forms of creative expression.”

This multi-faceted collage of Austin life has also provided a space for experimenting in creative work beyond the scope of traditional academic scholarship. Sean Cashbaugh, a doctoral student in the American Studies department and member of the editorial board, notes, “For me, The End of Austin was an opportunity to do some important creative and intellectual work in a space outside traditional academic venues, ones that are becoming increasingly important.  In this project, we’ve been able to bring ideas and people together that otherwise might never have come into contact with one another. I think that will let us talk about things like urban identity, politics and creativity, and of course Austin’s end, in a new way, one that avoids the cliche nostalgia conversations like these often evoke and depend upon. Publishing online is a key part of this:  as a digital humanities project, we can reach a large audience, meaning the discussion we’re having here can spread throughout Austin and beyond the city itself, incorporating other voices and hopefully jump-starting new conversations and projects.”

Take a look at these stories and voices at endofaustin.com, and feel free to share your own stories in the comments there, too.

One comment on “Announcement: ‘The End of Austin,’ Digital Humanities Project, Now Live”