Today over at ShelfLife@Texas, UT American Studies alumnus and historian Matthew Hedstrom shares details about the evolution of “Post-Protestant spirituality” and his book, The Rise of Liberal Religion: Book Culture and American Spirituality in the Twentieth Century (Oxford 2012). 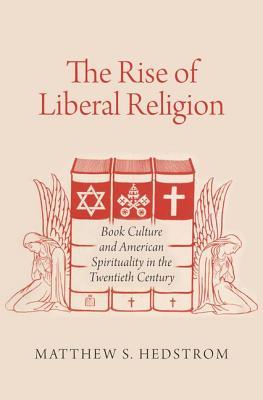 The following comes to us from the interview with Hedstrom up at ShelfLife@Texas, in which Hedstrom discusses his inspiration for the project and what he hopes his readers will get out of The Rise of Liberal Religion:

As I was thinking about all these things, I came across a set of sources about religion and reading in the 20th century and thought, “Ah ha! This is how I can access the stories I want to tell.” So I began studying the history of religious books and reading in the 20th century, because I quickly came to see this as one of the most important ways that religion happens outside of church, especially in a consumer-oriented society like ours.

I hope my book raises questions for my readers about the power of consumerism in our society. I hope my readers will come to see that the categories “religious” and “secular” are not very easy to disentangle—that psychology and spirituality, for example, often blur. And I hope my readers will look at religious liberalism as a significant religious tradition in the United States, one with strong ties to Protestantism but not limited to Protestantism. Much of the vitality in modern American religious life is in what might be called post-Protestant spirituality, and I want my readers to learn to see the contours of this phenomenon and to understand where it came from.