Our next story comes from Carrie Andersen, who writes about an unexpected collision between her orals exam reading and David Byrne:

This summer finds me in the midst of reading for my oral exams, which will take place next spring, come hell or high water. But I have been fortunate to take a few breaks from the books and from Texas. Of note was a trip with my family and a friend, my perpetual travel companion, to Italy. We explored the Tuscan countryside from our home base in a tiny village, Pian di’ Sco, before travelling southward to Rome, which was not so much a tiny village but a nonetheless welcome break from the books.

Another trip—a decidedly shorter jaunt to my hometown of Chicago—unexpectedly stirred up a host of questions relating to my reading (people have been telling me you can never get completely away from the books; I’m beginning to  think that’s true). The event responsible for the whirring of orals brain? A David Byrne concert. 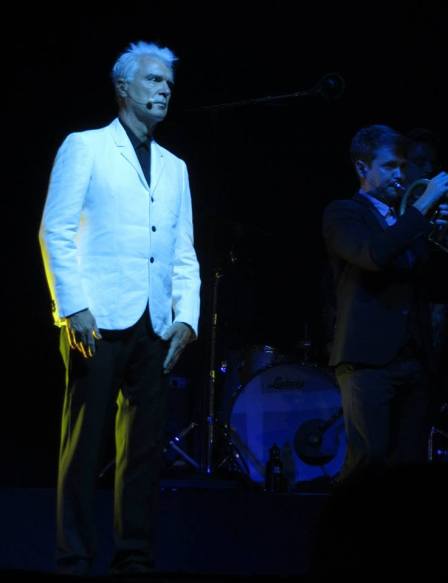 Or, more accurately, a David Byrne – St. Vincent concert. The former Talking Heads frontman (and one of the most creative and fundamentally weird men in the public eye today) has been on tour for a few months in support of his recent collaboration with St. Vincent called Love This Giant.

The show was one of the most hilarious and fascinating performances I’ve seen in recent memory. Byrne maintained his jerky, stunted choreography made famous during the Talking Heads years—at one point, he shadow-boxed a theremin—but he was so earnest that his yoga-like motions moved quickly past awkward, past endearing, and straight into perfection.

Although much of the show focused on Byrne and St. Vincent’s newer material, we did enjoy four Talking Heads covers, one of which was (of course!) “Burning Down the House.” The joy of the crowd singing along with Byrne belied the macabre tinge of the song’s lyrics (you know, houses burning, calls to jump off of this worthless structure while lacking any visible means of physical or metaphorical support, the usual…).

Fear and paranoia have long been of lyrical concern for Byrne, according to Jonathan Lethem, whose Talking Heads’ Fear of Music attests to various sources of Byrnian unease from apocalyptic war to writer’s block to air. (Note: for a clear example of this apocalyptic spirit, see the above  performance of “Life During Wartime” – this ain’t no party, this ain’t no disco—this is the end).

These hang-ups are still floating around his oddball mind. One of his newest songs, “I Should Watch TV,” expresses ambivalence towards a technology that claims to offer a window unto the people but actually creates a demented version of identity and selfhood. What’s fascinating here is that Byrne is not alone in fixating upon everyday sources of anxiety that are often dwarfed by massive looming pseudothreats like terrorist attacks or nuclear warfare. Those fears are, so I’m reading, usually inflated by a government that benefits materially from the misconception of what is truly dangerous about modern life in America. These books tend to offer the same despairing refrain: forget terrorists. Focus on economic insecurity. (Or systemic racism. Or an existential crisis. Or air.) 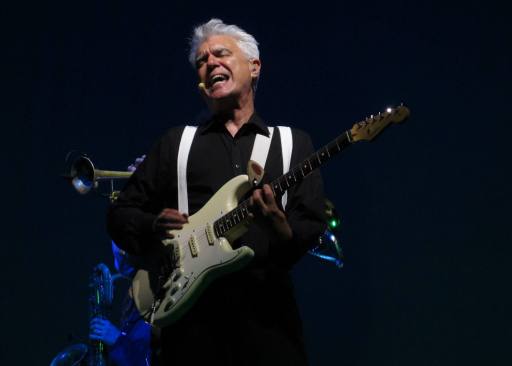 But even given his lyrical emphasis on dread, Byrne performed with unironic joy, smiling through songs about devastation and prompting the audience to laugh with him. Lesson learned: when everything is going down the tubes, dance your heart out.