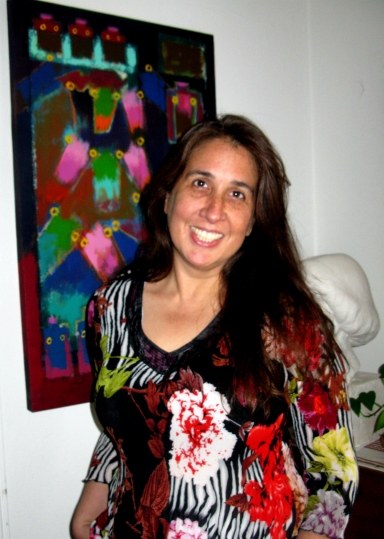 We return today to one of our favorite blog series: 5 questions with members of the American Studies core and affiliate faculties. Below, we feature a conversation with Dr. Cary Cordova, assistant professor of American Studies and graduate of our program (Ph.D. 2005).

What has been your favorite project to work on and why?

I would turn to the projects that have helped me work with people, the projects in which I am engaging with others, whether it is students or other colleagues or professionals out in the world; these projects have probably netted me the most personal satisfaction. Specifically, i am drawn to doing oral history. When I initially approached oral history, I viewed it as a way to source information, as a way to get data that otherwise wasn’t available. But then in doing interviews, I learned a lot more about myself and about other people, and oral history became a significant amplification of my education, it became a way of expanding my universe well beyond the world that I thought I was in. For instance, one of the artists I interviewed passed away, and I went to his funeral, and it was striking to see the numbers of people that were there. And I did not expect this, but his family had decided to play the interview that I had recorded with him there at the funeral for everyone to hear, and it was so moving and so powerful to suddenly have everyone in that room listening to an interview that had just been me and him, and it helped me see the ways in which the work I was doing had a greater relevance than just me and him sitting in that room.

How do you see your work fitting in with broader conversations in academia and contemporary society?

Academically, it’s pretty easy to see where I have come to be, because it has been pretty consistent. I have always been trying to negotiate this world between American Studies and Latino Studies, and I came to graduate school specifically to study Latina literature. I didn’t end up focusing on Latina literature, but disciplinarily that has been a continuous framework. Then through graduate school and a lot of other things I came to realize I was doing a lot with Art History and with Urban Studies, but those are just the disciplines, and per my previous answer, my academic engagement has always been tied to thinking about others and thinking about my community and thinking about people that make the world matter to me.

What people, projects, art, etc. have inspired your work the most?

How long a list can I give you? It’s a really hard question, because there are so many people that have inspired me and have trained me to think about the world. The way I work and the way I do my writing is a product of my education, and for me education does not happen simply in a classroom, it has come from a lot of the people I have come into contact with who I didn’t even know were educating me at the time. I was raised in San Francisco and there’s no way on earth I would have predicted I would be writing about the history of San Francisco and the way Latino artists produced their art in San Francisco at the time when I was a kid. And yet I know that I study it because somehow over the process of living there a lot of that art and a lot of those people reached out to me, maybe not directly, but it was there, and it had a dramatic impact. For example, I just came back from San Francisco and attended an event that was really one of the more powerful events in my life. It was a fundraiser for Yolanda Lopez and René Yañez who are being evicted from their home. They are two artists I have written about and who I think have done amazing work. Of course it’s this incredibly bittersweet event to see so many people coming together in the community, performing, from Cherríe Moraga, to Culture Clash, to Marga Gomez, all these different performers and speakers, all of them there because they care so much about these two people who are part of a larger problem of evictions in San Francisco. And Yolanda Lopez, someone I consider my mentor and who has been so meaningful to me in terms of the way she thinks, the way she creates art, told me that this is my family too, and that blew my mind, having these incredibly strong women, who in spite of their own struggles, have reached out to help me.

Why are these evictions taking place?

It’s a difficult answer and it’s not. Property values have been escalating to such a degree that it has propelled the use of an ordinance called the Ellis Act, which landlords are using to evict a lot of people that have been in rent-controlled situations. So what we are seeing is unprecedented numbers of people being evicted from their homes, especially in the area that I study, the Mission, because it has become such a bohemian enclave, owing largely to the work of the artists that are there.

What is your background as a scholar and how does that motivate your current research and teaching?

My background as a scholar is that I never thought I could be a scholar. My background as a scholar is that it is not a world that I ever could have imagined myself to inhabit as a kid or even as a young teenager. I really only attended graduate school because a couple of professors reached out to me at the very end of my undergraduate career, and that information has helped me register the enormous power that professors can have in their students lives, both good and bad, and made me very sensitive to the ways my words can have more meaning than I can dream. It also helped me recognize that many of my students may not know their own capacity for what they can accomplish, and that unless you help them see that, they may not ever be able to tap that capacity.

What projects are you excited about working on in the future?

I have a project that I’m trying to figure out on Latino landmarks in the United States. What are the physical places where Latinos appear in the nation and what kind of public image does this create or not create. I am especially interested in the ways that Latinos are portrayed politically, so I am thinking about issues of conservative Latinos versus radical Latinos, thinking about the Latino vote which is so incredibly emphasized but which never actually seems to recognize the heterogeneity of the population. So I’m toying with this notion of Latino landmarks.

If you had to describe American Studies in one sentence, what would you say?

I tend to look at American Studies as looking at the world with a kaleidoscope and embracing the different representations of the image that can appear through that kaleidoscope, but then being very careful not to say that all perspectives are equal.