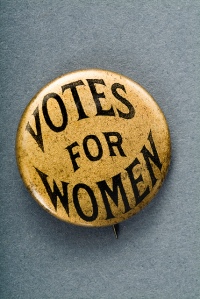 Image from the National Museum of American History

We’re pleased to share the news with you that Dr. Julia Mickenberg is featured in a discussion about the history of US – Russia Relations for BackStory, a nationally-syndicated public radio program affiliated with the Virginia Foundation for the Humanities. Dr. Mickenberg discusses her research relating to women’s suffrage in the early 20th century.

Here’s a summary of the episode, which you can listen to in full here.

In the past year, the White House and the Kremlin have sparred over Syria, the Winter Olympics, and now, the crisis in Ukraine. It can be tempting to view these events through the familiar lens of the Cold War, but in this episode, the History Guys probe the deeper history of our relationship with Russia — and discover moments of comity as well as conflict.

They’ll discuss Alexis de Tocqueville’s famous prediction in the 1830s, that the United States and Russia were “two great nations” that would each come to “hold in [their] hands the destinies of half the world.” And they find long-term connections and comparisons between the countries over time. From Civil War-era analogies between freeing American slaves and freeing Russian serfs, to early 20th-century debates over women’s suffrage, Americans have often looked to Russia as a counterpart, if sometimes a cautionary one.