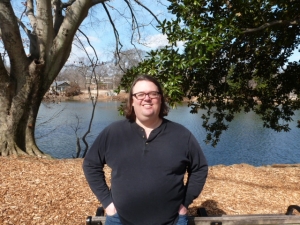 Since earning his Ph.D. from the UT American studies program, Mike O’Connor has taught U. S. history at universities in New York, Pennsylvania, and Georgia. He has published articles in the scholarly journals Contemporary Pragmatism and The Sixties. While at UT, Mike’s writing was featured in the Austin American-Statesman and he wrote a weekly column for the Daily Texan. One of the original bloggers on the U.S. Intellectual History site, he later founded (with several others) the Society for U.S. Intellectual History. His book, A Commercial Republic: America’s Enduring Debate over Democratic Capitalism, will be out later this month.

It took me many years to realize that my winding intellectual path was fundamentally focused on one theme: the influence and expression of philosophical liberalism in the United States. Before I came to UT, I took my bachelor’s and master’s degrees in philosophy. Since graduating from the American studies program, I have been teaching US history. My book tells the story of the changing debate over the role of government in the national economy, in order to contest the contemporary conservative narrative that suggests that the nation was “founded on” the principles of laissez faire. As such, it engages with economics, politics, history and public affairs. I’ve even published an article on Star Trek. Though these projects might seem unrelated, all of them, I now see, have served as vehicles for my attempt to understand, analyze and explain the influence of liberalism in American thought, culture, politics and economics.

In order to get at this question, I needed to synthesize the insights and perspectives of many different disciplinary approaches. That sort of eclecticism is something that I cultivated during my time at the University of Texas. The AMS program gave me both the tools and the confidence to pursue the particular questions that sparked my interest, and to reimagine academic disciplines as inviting resources rather than forbidding boundaries. Without the interdisciplinarity that I learned in the department, I would not have been able to recognize the coherent intellectual program at the root of my various disciplinary forays.

I have so much advice! Pretty much all of it stems from things that I gradually learned both during and after school, but wish that I had been able to figure out a little earlier in my graduate career. Hopefully, today’s students are more savvy than I was, and don’t need to be told any of those things. But just in case, here are my nuggets of wisdom, such as they are:

I really enjoyed being part of the American studies department at UT. It provided me with a lot of freedom to grow into the scholar that I wanted to become. The department and its faculty offer tremendous opportunities to achieve the same thing for yourself. Good luck!