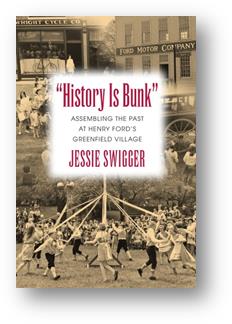 We hope you’re enjoying the tail end of your summer, friends of AMS! Some exciting news from one of our alumni: Jessie Swigger, who received her Ph.D. from the program and is now a professor at Western Carolina University, has just published a new book entitled “History Is Bunk”: Assembling the Past at Henry Ford’s Greenfield Village. The book chronicles the historical development of Greenfield Village in Dearborn, Michigan. The synopsis from the press:

In 1916 a clearly agitated Henry Ford famously proclaimed that “history is more or less bunk.” Thirteen years later, however, he opened the outdoor history museum Greenfield Village in Dearborn, Michigan. It was written history’s focus on politicians and military heroes that was bunk, he explained. Greenfield Village would correct this error by celebrating farmers and inventors.

The village eventually included a replica of Thomas Edison’s Menlo Park, New Jersey, laboratory, the Wright brothers’ cycle shop and home from Dayton, Ohio, and Ford’s own Michigan birthplace. But not all of the structures were associated with famous men. Craft and artisan shops, a Cotswold cottage from England, and two brick slave cabins also populated the village landscape. Ford mixed replicas, preserved buildings, and whole-cloth constructions that together celebrated his personal worldview.

Greenfield Village was immediately popular. But that only ensured that the history it portrayed would be interpreted not only by Ford but also by throngs of visitors and the guides and publicity materials they encountered. After Ford’s death in 1947, administrators altered the village in response to shifts in the museum profession at large, demographic changes in the Detroit metropolitan area, and the demands of their customers.

Jessie Swigger analyzes the dialogue between museum administrators and their audiences by considering the many contexts that have shaped Greenfield Village. The result is a book that simultaneously provides the most complete extant history of the site and an intimate look at how the past is assembled and constructed at history museums.

Go forth and buy the book here!