Back on September 12 here at UT, the department hosted a great talk by one of our recent graduates, Dr. Carly Kocurek, who discussed “What We Talk About When We Talk About Ms. Pacman.” Before her talk, we sat down with Carly to discuss her current research as well as her time at as a graduate student at UT. 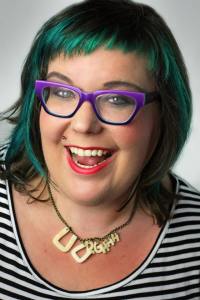 What will you be talking about today?

Today I will be talking about the nostalgia for what gets called the golden era of the video game arcade, which I position roughly between 1972 to 1985 (there’s some wiggle room in there). There’s been a real vogue for new arcades and archiving projects both formal and informal, so I’m talking about that, but I’m also talking about what’s at stake in this resurgence of interest in arcades, and what people are actually trying to preserve or longing for when we they talk about a kind of arcade that many of us didn’t experience firsthand. I’m positioning all of this within the context of the current culture wars of gaming.

How did you get interested in this topic? Is it part of a larger project?

I’m wrapping up my book, which doesn’t yet have a title (that’s the last thing that happens in that process), but it’s about the classic arcade and the creation of the gamer that happens around the classic arcade. Even though that term is used later, from the 1990s forward, there’s already an emerging idea in the 1970s of who plays games. The word “vidiots” is used — there’s actually a little magazine called Vidiots — that was published for what we would now call gamers and was sold through arcades. I got interested in that because I was interested in gender and games and the assumptions about who plays games and why. I wondered, when did we start assuming that women don’t play games, and why did this happen? If we look at media history, especially when we look at how many different media are considered feminized, for example film or television (there’s strongly gendered traditions there that we generally think of as feminine) it appears peculiar that we think of games as being something that is “for boys.” Looking at that early coverage of games, I wondered, what are we saying about games, who are we saying they are for, why are we worried about who games are for? I argue that there are a lot of factors that influence this, including the Cold War and the Space Race and the technological anxieties of the time, as well as the ongoing crisis of masculinity in the U.S. in the twentieth century and especially after World War II. There’s also the story of the coin-op industry itself, which was trying to look respectable and really struggled — still does — with looking respectable. They saw these young, clean-cut men playing games as a good way to stake their claim for respectability, saying, “Look, we’re doing good things for the kids!” But what happened is that we have all these images of boys playing games, which is powerful and narrows down who designers think they are catering to.

There’s something at stake here that is important and needs an intervention, needs to be exposed. I think there’s a lot of good in gaming, even though we often hear about the terrible misogyny and racism in the gaming world. The gaming industry employs a lot of artists and there’s a lot of emphasis on design and teaching social behaviors and imparting important skills which people value and love, and that’s why people are so passionate about gaming. But what does it mean when that is not open to everyone? That is the real question.

How does your work build on what you did as an American Studies graduate student at UT?

This work is an update and expansion of what was at one point the final chapter of my dissertation. It has been a few years, so that work has moved and changed quite a bit in part because of something I started to notice–the recent revival of the classic arcade, with places like Barcade in Brooklyn. I wondered, how come Dave and Buster’s is a place that corporations have events? There’s Pinballz in Austin, which is a really wonderful arcade, and my neighborhood in Chicago has an arcade called Emporium.

This all started when I was working on my dissertation at UT. My original question was, why do we think games are for men and boys? I could ask people why they think that now, but there’s actually a historical process that helps us understand this. It’s not a “natural” occurrence. I was also really interested in what young women are doing with pop culture and how they are responding to and through pop culture.

Do you have any advice for current graduate students about how to get the most out of their time at UT?

For me, it was really important to have a hobby or something that I was spending a lot of time on that didn’t have to do with school. Sometimes that was volunteer work, sometimes it was sports, it just depended. I think it made my writing a lot better, because I spent a lot of time freelancing and blogging and things like that. I also think it’s good to have a backup plan, and that’s not just because the job market is terrible, which I think everyone gets told all the time, but also because you might realize that you want to do something else. I think keeping in mind that you are actually a person and not just a graduate student is really great. When I was going through the death spiral of the job market my last year, I was making a plan for what I might do instead. For me, I would have gotten a game design certificate at ACC and looked for a job in the industry. That’s not the right fit for everyone, but that would have been an okay path for me. We have alumni that teach at really amazing high schools, or run really excellent nonprofits or make documentaries or work for the state department. All kinds of things. Thinking about how you would apply your interests later is a good thing to do.