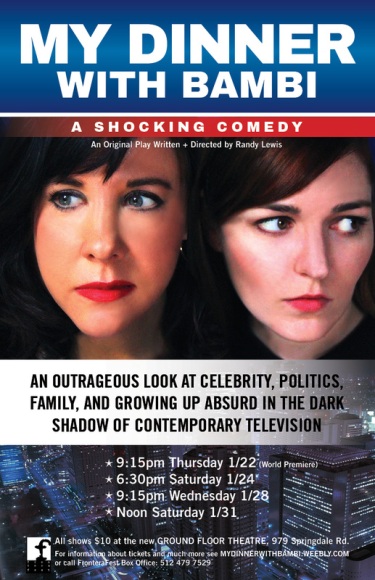 Although our university won’t be back in session for several days yet, we couldn’t wait to post this exciting news about one of our faculty members. Dr. Randy Lewis, who we’ve featured in the past for his expansive work on topics from surveillance to media studies to public scholarship, has penned an original play that will premiere in Austin later this month. We asked Dr. Lewis for a few words about his new work, and how it relates to his broad interests in all that American Studies has to offer…

So a funny thing happened on the way to the lectern—I wrote a play, a dark comedy called My Dinner with Bambi (A Shocking Comedy) that is now in rehearsals under my direction. Is it funny? Outrageous? Insightful? You be the judge when it opens on January 22 at Austin’s FronteraFest.

The main character is a force of nature called Bambi Krill. She’s a media celebrity extraordinaire, a powerful woman with hints of Sarah Palin, Ann Coulter, Stephen Colbert, and Mephistopheles. The basic set-up is that she’s holding court with her two young acolytes, Sarah and Roger, one of whom is not yet converted to the dark side of big money punditry. Drinking heavily after a widely protested campus lecture, Bambi spars with her minions until an explosive encounter with Sarah’s parents brings deeper tensions to the surface. And no one—on the right or left—gets off unscathed. (I mean this quite literally: a real Taser is one of our central props).

As anyone who knows me can deduce, Bambi is another version what I often talk about in the classroom. For instance, last fall I was working on Bambi while teaching undergrads how to make documentary theater out of Internet troll comments (talk about tragedy!). I love this overlap between my academic and creative work. For me, it all flows together—especially when I’m teaching courses with titles such as “The Politics of Creativity.” Bambi also has many literal connections to UT: we auditioned actors at night in a seminar room in Burdine, we ended up casting several alums and one faculty member, and we’re working with a consultant from UT’s Drama Department, which is something I really appreciate as a first-time director.

We have an amazing cast and know that you’ll enjoy the show—especially if you have any connection to American Studies. After all, how many plays have jokes about Moby Dick, Thomas Kinkade, and turducken? (Not King Lear—I checked!). Even if you’re not part of the American Studies world, we hope you’ll come see Bambi in action starting January 22.

More information about the play can be found at its website and Facebook page, and tickets for all four performances are available here. We recommend you buy tickets in advance if you’re interested in checking the show out – they’ll sell out!