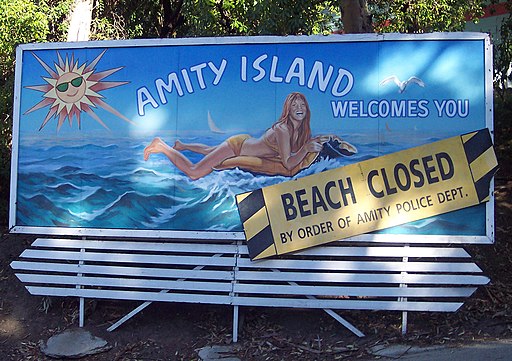 We love a good blockbuster action movie as much as the next guy and gal, so we’re thrilled to share with you some new research from Dr. Janet Davis. Recently, Dr. Davis presented a talk about the relationship between cultural memory, the Vietnam War, Jaws, and First Blood, and she also provided a write-up of the talk to the the blog Not Even Past. We’ve printed an excerpt below; the full shebang can be found here. Enjoy!

The theme of the abandoned soldier is blasted writ large in the film’s first sequel, Rambo (First Blood Part II): Rambo is released from prison to return to Vietnam on a special mission to search for American POWs. Released in 1985, the film was an international box office hit—the first of three sequels, which Morrell likened to “westerns or Tarzan films.” First Blood Part II’s celebration of Rambo’s massively muscled heroics and its erasure of ambivalence about the nation’s involvement in Vietnam, gave popular form to President Reagan’s full-throated declarations of whipping the “Vietnam Syndrome.”

At the time of First Blood’s publication in 1972, a writer named Peter Benchley was drafting an “Untitled Novel” about the social and economic chaos unleashed by a murderous great white shark that eats five people at a beach community on Long Island. A member of the celebrated Benchley literary family, Peter grew up watching marine life at his family’s summer home in Nantucket. His childhood fascination with sharks endured at Harvard, and his subsequent career as a journalist and a speechwriter in the Johnson Administration. Benchley’s privileged background gave him an intimate sense of the WASPY summer people who populate his fictional seaside community of Amity in the novel that he finally named Jaws. References to Vietnam punctuate the novel. In an early draft, Benchley describes the young adult summer people, the lifeblood of this struggling seaside community, as virtually immune to the shocks of war and socioeconomic upheaval because of their wealth and their ready access to college draft deferments, or through desirable draft assignments as naval officers or reservists: “If their IQs could be tested en masse, they would show native ability well within the top ten percent of all mankind…. Intellectually, they know a great deal. Practically, they choose to know almost nothing. For they have been subtly conditioned to believe (or, if not to believe, to sense) that the world is really quite irrelevant to them. And they are right…. They are invulnerable to the emotions of war.”