As part of UT’s Undergraduate Research Week, our department will be hosting its 5th Annual Undergraduate Honors Thesis Symposium, to be held on Friday, April 22, 4-6pm, in Burdine 436a. Today, we feature a conversation with one of our undergraduate senior thesis writers: Max Mills. Here, he describes some fascinating findings from his research, as well as some of his favorite moments that emerged from majoring in American Studies. Enjoy! 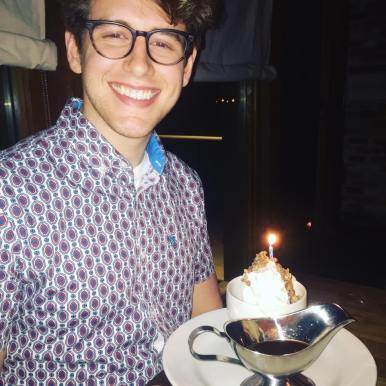 Why did you major in American Studies?

Coming into UT, I had no idea that the American Studies Department existed. I actually only signed up for Intro to American Studies for my second semester because it fulfilled a flag requirement. The class was taught by Dr. Engelhardt, and it was essentially a course investigating the evolution of gender in America. I was hooked after the first day, but it was the lecture on the importance of Tupperware in American culture that made me realize that I needed to be an American Studies major. The courses that I took later down the road confirmed that I made a great choice. I liked what I was able to learn from an American Studies education, and the interdisciplinary nature of the field really appealed to what I wanted to get out of my time at UT. I mean, who else can say that they learned about the importance of Marxism in American film, the impact animals had as agents of American Empire, or the connection between video games and the military à la the “military-entertainment complex” during their college career?

Do you have any favorite memories from your time in American Studies?

There are too many!! But one that comes to mind is from an assignment in Dr. Davis’ Animals and American Culture 370. We had to bring a cultural artifact that related to factory/ industrialized farming, and so I decided to bring an empty carton of eggs. Her class was the last one I had on those days, and so I carried this carton of eggs everywhere I went with me. I mean, everywhere. And for some reason, everybody reacted to me as if I had a scarlet “A” embroided on my chest. I kept getting asked questions like “What’s the deal with the carton of eggs?” It was a cool way of being able to engage with my colleagues about factory farming and once again reinforces how awesome the American Studies Department is.

What is your thesis about, and why did you decide to write a senior honors thesis?

My thesis is an investigation of the integration process of Waxahachie Independent School District, a process that took about eighteen years after Brown v. Board was decided. While many schools in the South did delay school integration for many years, there are several reasons why I decided to write about this topic in Waxahachie. For one, it’s a history that is incredibly personal to me. Not only is it about the community that I grew up in and care for, but there is also a deep family history that runs through this narrative. My grandfather was the assistant superintendent that was hired to help implement the full desegregation of the school district in 1970. There is also, probably not surprisingly, a lack of community history regarding this process. Even though the memories of integration are held within many community members, I felt that a comprehensive history needed to be preserved for future generations.

What kinds of sources do you draw upon in your research?

Most of my sources were primary documents: school board minutes, newspapers, and yearbooks. I also interviewed a few community members that were former students of the all black schools in Waxahachie, as well as the two superintendents that helped integrate the district in 1970. When I was doing archival research in the school administration building in Waxahachie, I actually got to dig through the physical board minutes and correspondence with the office of Housing, Education, and Welfare. Getting that close to history was amazing.

Has your thesis research yielded any surprising findings?
I knew that white supremacy was manifest in my town, but it was the extent of white supremacy that really took me aback. Reading things like “First KKK wedding in Texas occurs in Waxahachie,” and seeing a high school yearbook cover of a black field worker kneeling before a white overseer made me realize what kind of history I was going to expose and write about.

At first I was worried about upsetting people in my community. But that’s Waxahachie history, and avoiding it or choosing to ignore it is counterproductive to progress, and is even dangerous. I hope that this thesis can spur some much needed conversations about race and place.