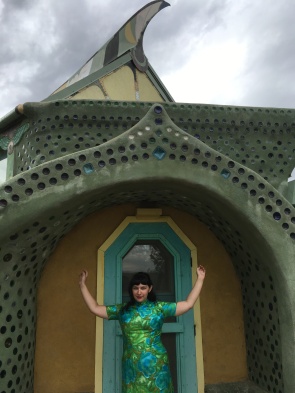 As I admired a display case of 18th-century chastity belts, specula, butt plugs, and mysterious medical equipment, the proprietor of the antique shop in the tourism center of town inquired what I was doing in Taos. I told him that I was there for a research trip. Though he must have been in his 60s or 70s and living in the United States for quite some time, the antique store owner told me through his thick French accent that he too had received a PhD (in geography) when he was younger but decided that collecting antiques was much better. I asked the man what he thought of the Earthships located just outside of town; he spit and cursed and told me that “Michael Reynolds is a con artist. People in Taos should not be living in the ground! Why would you want to study him?” He did not seem to want an answer and continued on his tirade, then said “fuck you” as I left the shop, which he assured me was a traditional French way of saying “good luck.”

Taos is a surprisingly lush, mountainous area located in the northeast corner
of New Mexico. In the valley west of the Rio Grande gorge, a vast expanse of
sagebrush desert is home to hundreds of off-the- grid homes known as Earthships. Made of brightly tinted concrete adobe and decorated with recycled glass accents, the Earthships are built half underground, with the exposed façade covered in floor-to-ceiling greenhouse windows. “Earthship” is a trademarked term coined by architect Michael Reynolds, who invented the particular architectural forms of what were intended to solar-powered, off-the- grid homes with complex gray- and black-water systems, built in such a way as to regulate temperature without heating or air conditioning, in an aesthetic congruent with the surrounding landscape and the human body. Despite the hippie aims and aesthetics, the Earthship Biotecture headquarters in Taos is more of a gated community than a commune, speckled with independent homes of varying luxuries that share a water cistern, internet router, and hiking trails. 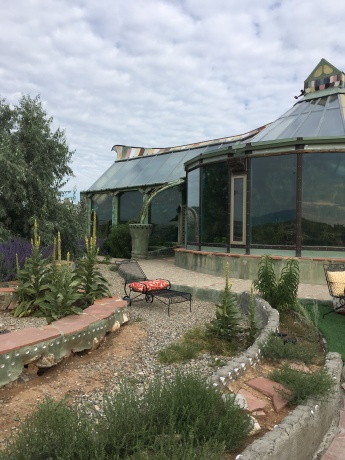 Michael Reynolds’  confidence in Earthship technology was not amenable to improvements or adjustments, which caused him to lose his architectural license for a number of years in the 1990s. The first Earthship designs were not all structurally sound, nor did they function the way they were supposed to—especially in more severe climates than Taos. Compacted dirt over tires cracked without more supple binding; homes overheated in the summer and froze during the winter; and solar panels were insufficient to establish energy independence for inhabitants of darker or rainier climates.

The mystical beliefs touted by Reynolds in his teachings, his adamance that Earthships are the answers to everything from the housing crisis to global warming to human spiritual alienation, and the profits that he earned from hocking technologies that had not passed the test of time, all point to Reynolds as a cult figure con artist. That said, the improved Earthships of today—at least in climates like Taos—function as they ought to and could potentially be used as prototypes for the housing problems posed by current economic and environmental conditions. Reynolds now uses the Earthship Biotecture Headquarters as an architectural school, a museum of Earthship technology, and a somewhat luxurious ecohotel. 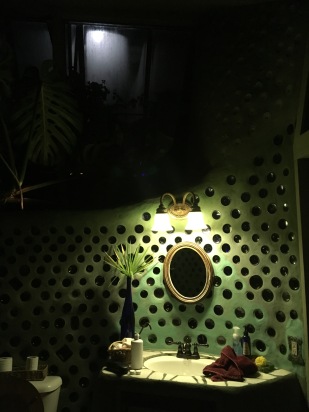 I drove through the desert to find the museum at the headquarters–a prototype built in the Taos Earthship community to educate the public about Earthship technology—where I was also to check into my Earthship AirBnB. I had originally intended to stay in the modest “Hobbit House,” the first Earthship ever built in 1979, but as history might have predicted, the house was under construction, and my stay was upgraded to a much more recently-built, luxurious Earthship called “Phoenix.” One of the students of the Earthship Biotecture school gave me a guided tour of the house, which was much more exciting and demonstrative of the possibilities of Earthships than the educational model. He talked me through the ways that electricity, heated water, filtration, and even the internet service were optimized to preserve energy. All of the materials presented at the museum—Reynolds’ books, documentaries about the Earthships—were available in the AirBnB, making a visit to the museum unnecessary for anyone staying at one of the Earthships.

As a student of American Studies with a background in literature and architectural and art history, understanding the subtleties of the home’s eco technologies was mostly above my head. However I really appreciated learning about the physical construction and aesthetic decoration of the decadent Earthship to which I had serendipitously gained access from someone who had helped to build it. The interior of the home was sculpted cement abode, decorated with Gaudi-like art nouveau accents. The bedroom was an Oscar Wilde opium lounge, the quarters of an odalisque, with peachy-pink textured walls, backlit stained glass, Persian rugs, and Tiffany-esque lamps on either side of the bed; natural light spilled in from the glass doorway to the otherwise windowless room. The bathroom bridged the space between the interior cave and exterior greenhouse, painted aqua-green, speckled with glass bottles, the tub sculpted out of the wall itself; above it was the greenhouse ceiling with vines dangling over the upper edge. The living and dining rooms were full of plants that grew up from the floor, as though a jungle had been brought inside the home, circling a fireplace evoking a yonnic mouth that, with a flick of a switch, produced a waterfall from the filtered gray-water.

Perhaps the most magnificent feature of the Earthship’s architecture was the
greenhouse surrounding its exposed exterior. Tropical plants of all sorts—palm and fig and mandarin and banana trees, orchids, hanging vines—lined the walkway that stretched the distance of the interior garden. A second dining table was bookended by ponds, inhabited by koi fish and turtles. There were even cockatiels living in the greenhouse, flying freely as though it were an aviary. A second garden grew outside the greenhouse in an enclosed yard full of hardy desert plants, providing a home to a small group of egg-laying chickens. These plants and animals required constant care by Earthship Biotecture students and volunteers, and upon further research, it became clear to me that this kind of living home is not the sort of thing that most people could maintain. For all the effort and additional knowledge it requires, the reward is living in a house that sounds and smells and feels alive. The air is fresh and floral, combating the dryness of the desert. Stars are more visible through the ceilings of these Earthships than they are in most of the United States.

I left the next morning sobered by the knowledge that “Phoenix” is on the market for $1,500,000—not exactly the price tag you would expect based on the intents presented by Earthship technology—tempered with the unshakable urge to follow the footsteps of my Earthship caretaker and attend the Earthship workshops and build my own. Earthships are not the revolution Reynolds touts them to be, but they are a most appealing repose from the coldness and alienation of the world by whichwe are so often surrounded. 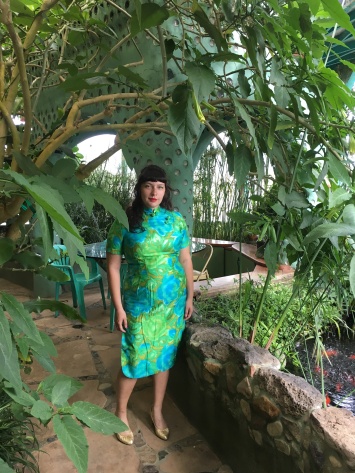