I’m a rock fan. I listen to rock music, go to rock concerts, watch rockumentaries, and write about rock culture as a graduate student. In fact, I’m more than a rock fan—I’m a full-blown rock nerd. So you can imagine I was pretty flippin’ excited to volunteer with Girls Rock Austin (GRA) this summer.

A nonprofit and local chapter of the Girls Rock Camp Alliance, Girls Rock Austin puts on a variety of annual programs to empower “girls and women through music, education, and performance.” This includes weeklong day camps for girls, gender fluid/non-binary and trans youth (ages 8-17) every summer. At its core, GRA’s rock camp builds on the DIY ethos of punk rock feminism: anyone can do anything with the resources they have, including play instruments, write songs, and form bands. But the camps are more than an introduction to musical culture. Along with instrument instruction and band practice, campers engage in a range of workshops covering topics such as healthy relationships, identity, and intersectional feminism. Every aspect of camp is volunteer-run, and many (if not most) of GRA’s volunteers are musicians themselves. 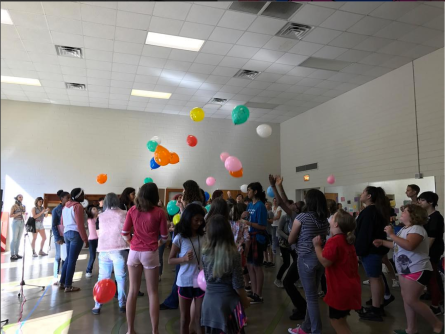 Campers participate in an icebreaker activity on their first day of rock camp. Image courtesy of the Girls Rock Austin Instagram page (@girlsrockatx).

Since I’m a pretty mediocre guitarist at best, I volunteered in roles that were much more suited to my abilities: band counselor and workshop leader. Along with band coaches, or volunteers who have experience playing live music (in bands or otherwise), band counselors provide a support system for the campers throughout the week. We’re the cheerleaders, the clowns, the hype-people, the confidants, the referees, the whatever-the-campers-need to have a blast at rock camp. After the campers form bands on the first day, a coach and counselor pair is assigned to each band and sees them through the week. I worked with The Giants, a band of four teenagers who named themselves such because they were all about six feet tall.

Sitting in on band practice everyday and witnessing young people work together to write songs and find their creative voices reminded me of the radical potential of music. As cheesy as this sounds, it also filled me with an incredible sense of hope for the future. This feeling only intensified during the Women Who Rock workshop, a rock herstory lesson that I co-lead with fellow volunteer, Eryn. We discussed Madame Gandhi, Miriam Makeba, Alynda Segarra (Hurray for the Riff Raff), Libba Cotten, Sadie Smith (G.L.O.S.S.), and Wendy Carlos, six women of various backgrounds, eras, body types, and musical styles that all rock in their own unique way. While this was great experience teaching the material I hope to cover at a collegiate level, it was even more awesome to see the campers get inspired by these women—to make the connection that their own diversity and creativity is what makes them special, what makes them truly rock.

At the end of the week, the campers performed in the Girls Rock Austin showcase at the North Door. Friends, family, and supporters gathered to watch each band play the original song they had written and practiced at camp, and GRA staff exhibited other projects the campers had produced in the various workshops. Girls rock camp was a week of music, feminism, and fun that I feel incredibly lucky to have experienced, and I can’t wait to volunteer again next year.

Campers and volunteers close the day with the camp song. Image courtesy of the Girls Rock Austin Instagram page (@girlsrockatx).