Dr. Benjamin Lisle (UT AMS PhD, 2010) published his first monograph last year, entitled Modern Coliseum: Stadiums and American Culture (University of Pennsylvania Press). AMS :: ATX sat down with Lisle to discuss the genesis of Modern Coliseum during Lisle’s time as a UT doctoral student, the works, ideas, and thinkers that inspired Lisle’s project, and the place of Modern Coliseum in broader intellectual trends and debates, both inside and outside of the academy. Lisle also shares his appreciation for the inspired and collegial atmosphere of the UT American Studies department, and offers some advice for current graduate students. Please enjoy this fascinating–and inspirational–interview. 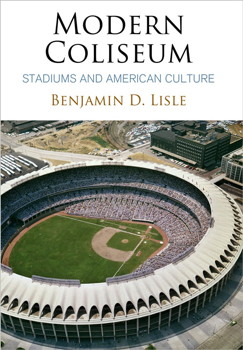 Can you tell us a little bit about your book Modern Coliseum, and how you came to the project?

Modern Coliseum tracks changes in stadium design and culture since World War II—from Brooklyn’s legendary Ebbets Field to Baltimore’s retro Camden Yards and its contemporary siblings. At the heart of the story are the modernist stadiums of the 1960s and ’70s, exemplified by Houston’s Astrodome, “eighth wonder of the world.” These engineered marvels channeled postwar national ambitions while replacing aging ballparks typically embedded in dense urban settings. They were stadiums designed for the “affluent society”—brightly colored, technologically expressive, and geared to the car-driving, consumerist suburbanite. The modern stadium thus redefined one of the city’s more rambunctious and diverse public spaces, while reshaping perceptions of the city and its public. And its influence on the stadiums of today is profound, though unappreciated. I try to tell the story of urban change, the shifting ways people experienced the city and each other, and the development of modernism on the ground, as it was imagined, designed, built, and lived as an architectural and social phenomenon. It also has a lot of fun images.

I came to Austin with an interest in stadiums, sport, and urban culture—stemming in part from living in Boston after college, where I became fascinated with that urban geography and Fenway Park. My master’s thesis project had examined nostalgia and baseball in the late twentieth century, which included analysis of Camden Yards. People’s valorization of both the “classic” urban ballpark and their replicas led me to wonder why the intervening stadiums—these modern “concrete doughnuts” so universally loathed—were even built at all. In my first semester at UT, someone suggested I visit the Center for American History, which hosted the papers of one of the Astrodome’s engineers. There I found Inside the Astrodome, this incredible, 260-page glossy program sold in the stadium at its opening in 1965. It is this wonderfully hilarious and transparent volume of stadium propaganda that basically answered the question I had—what people were thinking when they built these modern stadiums. I started writing on the Astrodome, then moved outward to other stadiums and cities.

What projects or people have inspired your work?

I found plenty of inspiration close to home—Jeff [Meikle]’s approach to the material and visual, Steve [Hoelscher]’s expertise in the spatial, and Janet [Davis]’s dynamic study of the historical. Jan Todd [UT-Austin Professor of Kinesiology and Health Education] helped introduce me to networks in sport history. And, of course, many of my friends and writing partners in the department then.

As for other scholars, I loved Roland Marchand’s Advertising the American Dream, which shaped the ways I approached images as clichéd patterns and stories—I could apply these techniques directly to stadium programs and brochures. David Harvey’s The Condition of Postmodernity exploded my head—it was a book that provided this total explanation of everything I was seeing. I’ve cooled on it in recent years, but I still value it as an insanely ambitious explanatory text—and one that helped me see how space and time relate to human experience and cultural expression (even if it gets the culture part wrong some). Marshall Berman’s All That Is Solid Melts into Air was similar in that way. Thomas Sugrue’s, Origins of the Urban Crisis was important for my book. Though he is a historian, he pushed me to think more about how postwar space was weaponized to define racial experience—something the postwar stadium does too. I’ve gotten a lot out of George Lipsitz. Oddly enough, he wrote an article early in his career about modernist stadiums and political economy in Houston, St. Louis, and Los Angeles—stadiums and cities I examine in my book. But more conceptually, I appreciate his ideas about the white spatial imaginary, which I came to later in the writing but were quite useful in the book (and in teaching). I’ll stop there.

How do you see your work fitting in with broader conversations in academia and beyond?

The “spatial turn” was the theme of the ASA annual meeting in 2005—my first paper presentation at a big conference. My work reflects that move in American Studies that integrates the spatial and the cultural, thinking about how ideas are expressed through the built environment and the different experiences of those environments. The book and much of my teaching connect to and rely on conversations in urban history and geography—though I’m less interested in planning or politics than I am the cultural aspects of urban space and identity. Modern Coliseum also channels some of the work in critical sports studies—and is relevant to debates over public investment in stadiums and sport as a political platform (both explicitly and implicitly). More amorphously, I think it has been shaped by popular conversations about race, class, and space, provoked by movements like Occupy and Black Lives Matter.

How is this work you’re doing now, as a scholar, teacher or both, informed by the work you did as an American Studies student at UT?

One of the things I valued about UT—a major reason I chose to go there, in fact—was the way it mediated between what I saw as an older brand of American Studies and a newer one. I think people at UT particularly valued the place of history in American Studies more than many other programs or some of the work you see at ASA. I don’t mean to sound reactionary, but that historical rootedness was something I was looking for. You can see that in my teaching and research.

Teaching is important. I’m not a genius, and I was never interested (or it never occurred to me) that scholarship alone was realistic or desirable. The faculty I worked with in Texas were great models for that—obviously they are wonderful scholars, but they were also very generous with their valuable time.

The general spirit of the place—my relationships with others in the department—was great. People got along. This too was a reason I went to UT, and that probably sounds incredibly naïve, particularly in the current job market. But going somewhere that people got along was important to me at the time, and it’s something I think about every single day in my current position, where I love my colleagues. Institutions are always going to be frustrating, so being a good citizen locally is crucial. One of my colleagues here at Colby College tells us that the first rule of our American Studies program is “Don’t be an asshole.” For me this motto is both practical in a human sense, but also tied to the practice of American Studies—it fuses the ethical to the intellectual. I am thrilled to be associated with the UT program, which has this amazing family tree of teachers, scholars, and people—people that aren’t assholes and fight assholes, basically.

Do you have any advice for students in our department about how to get the most out of their experience at UT?

I doubt my advice would be very valuable, particularly in this job market. I’m not very strategic. But I did come into this (sixteen years ago?) knowing there were narrow prospects for work. So I told myself then that I wanted the experience of being around smart people and learning and writing, and whatever happened after I graduated would be a different thing. I’ve been lucky to have a position that allows me many of the freedoms I suspect we all like about academia. And I deserve it in the sense that I can do my job well. Even so, there are a hell of a lot of people out there who could do it just as well if not better. So, as hard as it is, I think it’s important to do things you are energized by, even if they seem unfashionable. I don’t think you can game the system by anticipating the project that will pop with the ASA theme in two years—or at least I can’t. There just aren’t enough permanent positions out there. This job takes a lot of energy, and in my now seven-ish years of doing it, post-graduation, I have been increasingly trying to strip away the things I don’t care about to focus on those that I do—whether or not they seem more likely to help me get a tenure-track position (which I don’t currently have). I try to trust that what is interesting to me will be interesting to some other people too. And as practitioners of American Studies, we typically bring compelling questions to any topic.

What projects are you excited to work on in the future?

Well, I thought I might write about things other than stadiums once the book came out, but now I find out that if you want people to read it, you need to keep writing to draw them to it. That’s not the question though.

One thing I am excited about is a project on craft beer culture, with a particular focus on urban geography. I’m starting in Maine, developing a digital archive with oral histories, maps, collections of visual ephemera, and some short writing as a form of drafting. You can find the Maine Beer Project, in its infancy, here: http://web.colby.edu/mainebeer/. Depending on how that goes, I might try to scale it out to other places.

I’ve been trying to help develop courses and student work in the digital humanities at Colby in recent years, so some of my other work has taken on a more public and local focus—things like examining urban renewal in a small city like Waterville, Maine. I’m the project coordinator for Digital Maine (http://web.colby.edu/digitalmaine/) which supports DH projects at the college.

Last semester, I taught a class on ethical urban development. We had the chance to work some with the Chicago-based artist Theaster Gates, whose work really inspired our group. We’ve used that as a launching pad for a design group of students and community partners to develop actual material urban interventions in Waterville, an economically distressed former mill town where the college is located. That’s been fascinating and challenging—and not the sort of thing I would have anticipated a year ago.

So, the things that excite me now are projects that are creative, collaborative, and hybrid. While making a book is certainly creative and rests on the contributions of others, these new projects have different dimensions to them. Making things in public seems to be what excites me these days, and it seems appropriate to the challenges we’re facing as a society.