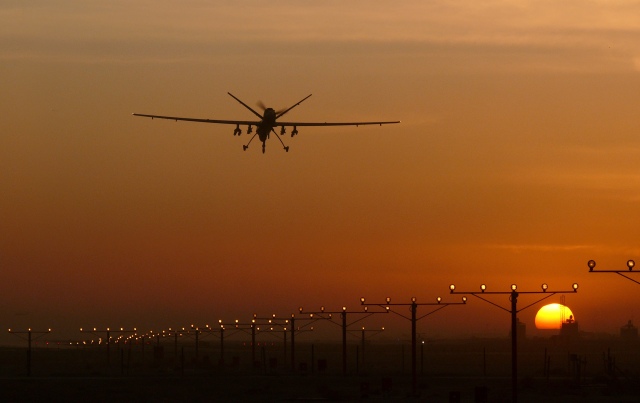 Summer may be winding down – it is August, after all – but we still have exciting news to share with you folks about our departmental community and its various projects. Ph.D. student Carrie Andersen has just published a journal article in the July 2014 issue of Surveillance and Society, entitled “Games of Drones: The Uneasy Future of the Soldier-Hero in Call of Duty: Black Ops II.” This work comprises part of her dissertation research: her project examines the cultural and political construction of the drone within the post-9/11 milieu.

Check out her abstract below. The full article can be found here (bonus: the journal is open-access, so have at it without logging into any databases!).

In this article, I argue that the first-person shooter video game, Call of Duty: Black Ops II, reflects the U.S. military‟s transition as it reimagines the soldier‟s role in war. In the age of drone technology, this role shifts from a position of strength to one of relative weakness. Although video games that feature future combat often “function as virtual enactments and endorsements for developing military technologies,” Black Ops II offers a surprisingly complex vision of the future of drones and U.S. soldiers (Smicker 2009: 107). To explore how the game reflects a contemporary vision of the U.S. military, I weave together a close textual reading of two levels in Black Ops II with actual accounts from drone pilots and politicians that illuminate the nature of drone combat. Although there are moments in Black Ops II in which avatars combat enemies with first-hand firepower, the experience of heroic diegetic violence is superseded by a combat experience defined by powerlessness, boredom, and ambiguous pleasure. The shift of the soldier from imposing hero to a banal figure experiences its logical conclusion in Unmanned, an independent video game that foregrounds the mundane, nonviolent nature of drone piloting. Instead of training soldiers to withstand emotionally devastating experiences of death and violence first-hand (or to physically enact such violence), games like Black Ops II and Unmanned train actual and potential soldiers to tolerate monotony and disempowerment.

Many of our graduate students have a variety of extracurricular activities and jobs that keep them busy in addition to the scholarly work that they do within the department. Carrie Andersen, currently a doctoral student, is a writer for Kill Screen Magazine, a periodical devoted to video game criticism and cultural analysis. She recently published a piece about the viral marketing strategies underlying the latest release in the popular Call of Duty video game series, an excerpt of which you can read below (and, if you’re inclined, the full version can be found at this link).

The threat technology poses to the future of the military also looms in Ghosts, set in 2023. Once again, a sophisticated military technology—ODIN, a weaponized space station—gets hacked by a collective known as “The Federation.” Once again, the hackers turn technology against American soil. The Federation destroys more than a few U.S. cities, leaving the nation open to social disarray and invasion thanks to an almost entirely crippled military. Chin up, though! Although the military has collapsed, a few surviving soldiers band together and create a paramilitary force known as the “Ghosts.” Cue the revenge fantasy; say farewell to the Federation.

Ghosts is thus ostensibly a classic tale of rugged individualism that has its roots in early American mythology. Think vaunted figures like Theodore Roosevelt, a cowboy-style statesman who would put Dubya to shame. Or Davy Crockett, whose brief shining moment in politics as a U.S. Congressman ended with a huffy departure for the wild frontier of Texas. Such figures—again, heavily mythologized—eschewed working within sluggish, stodgy institutions in favor of manly action exercised through aggression and occasional violence.

A glance at the marketing of Call of Duty: Ghosts suggests that the game can firmly be placed in that continuum of individual prowess, but with a more menacing twist. Here’s where Eminem comes in. After meeting with members of the Call of Duty team and catching a glimpse of Ghosts gameplay footage, Eminem purportedly retooled one of his songs, “Survival,” so that it meshed more cleanly with the game’s narrative. The final music video can be seen on the Call of Duty website, where the rapper performs in front of projections of in-game video footage of guns, soldiers, and death.