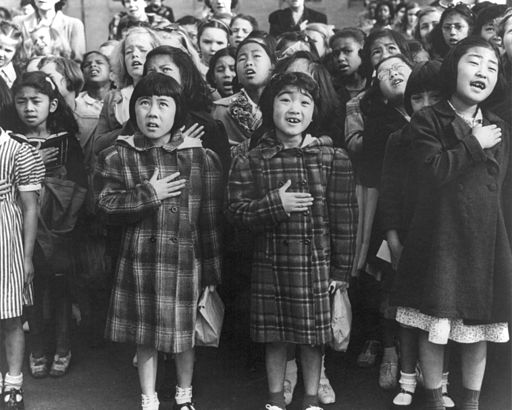 Have you read today’s Austin American-Statesman? If not, check it out for a new op-ed piece by Dr. Mark Smith about the history of the Pledge of Allegiance – a history that extends back to the late 19th century.

We’ve printed an excerpt below and the full piece is available here.

The Pledge of Allegiance is thus our pledges of allegiance. It has always symbolized, as Bellamy intended, the union of a nation of different nationalities, religions and regions into one strong and cohesive whole. It stood for the vision of Bellamy’s hero, Abraham Lincoln, of one nation indivisible with liberty and justice for all.

But, as time has passed and we face continuing crises, we have defined the nation in increasingly narrow political terms and have used the pledge to symbolize these political views. Today, there are two movements from the right and left to amend the pledge: the first, which ends “liberty and justice for all, born and unborn”; and the other, which inserts Bellamy’s original “equality, liberty and justice for all.”

On the first Friday in February, Dr. Ramzi Fawaz, braving the relative cold, came to UT from Madison, where he teaches at the University of Wisconsin, to give a talk on queer theory and comic book superheroes. Called “Flame On!: Nuclear Families, Unstable Molecules, and the Queer History of the Fantastic Four,” the talk is drawn from Dr. Fawaz’s upcoming book, The New Mutants: Comic Book Superheroes and Popular Fantasy in Postwar America. After he left Austin, we spoke by phone about comics, the importance of interdisciplinarity in both scholarship and teaching, and about American Studies as the study of how people dream what it means to be American.

In your talk at UT, you discussed The Fantastic Four and their contribution to queer literary history in the 1960s. How did you come across this project?

That’s a great question. There is a combination of personal and intellectual reasons that I approached this project. The personal one that I always tell is that when I was thirteen I went through this incredibly difficult period of my own life, as someone who was coming out as gay, who was ostracized, made fun of, bullied, etc., and, during this period of difficulty, I discovered the X-Men. I began reading this comic book that was about mutant outcasts, that was racially diverse, and I felt this incredible kind of identification with these characters that I never found in any other form of popular culture. As I grew older and started exploring American Studies in college, I became really interested in the kinds of questions that we ask in this field, where we don’t really think about how “I” personally relate to this object but, rather, what the conditions are that allow me to relate to this object in this way.

The questions grew wider and wider over time, and I began to ask myself if I was the only person who identified in this way? Or was there something about the comic book that speaks to people who feel like outcasts? Through a series of research projects at the undergraduate level, I began to explore the history of the X-Men, and that history lead me back to the sixties, and the array of comics, including the X-Men, that exploded out of that moment, some of which of course included the Fantastic Four, the Hulk, the Avengers, and many, many others. I began to realize that, in that moment, comic book creators began to think critically about readers like myself, and geared their comic books to people who did feel like they were out of the social norm, not merely people who identified as gay or lesbian, but also people who felt politically out of step with the conservatism of the US after World War II. This is fascinating to me.

So, there’s kind of a personal history that lead me to a larger, intellectual set of questions, and I think as a scholar, invested in popular culture more broadly, I fell in love with this question as an undergrad: why would fantasy forms, why would popular cultural forms that seemed so escapist, so distinct from politics, why would they be the site in which people were doing political work? This fascinated me, as someone who felt a commitment to radical, left wing ideals, but also didn’t necessarily express those commitments through direct-action politics but rather through the forms of reading and interpretation. I started to ask why would that be one of the sites where people do that political work? Comics seemed like one of the great objects through which people engaged the political.

Is this work you picked up as a graduate student?

The kernel for this work began as an undergraduate. I was lucky as an undergraduate to be trusted enough by some of my professors to be asked to be their teaching assistant. I was an assistant for a class taught by Kathleen Moran, who was the chair of American Studies at the time at Berkeley. The class was on consumer society, and she asked me to give a lecture on comics and consumerism. She encouraged me to do a reading of a text rather than a history, so I ended up doing this reading of the X-Men storyline “The Dark Phoenix Saga,” which some people at UT actually read as a chapter, and we talked about how this storyline was about anxieties of consumption. After I gave that talk, Moran told me “I think you nailed it, and I think you need to pursue this as a project.”

Little by little I was lucky enough to win small research awards, I spent a summer at Yale as an undergraduate research fellow, and I began writing about comics in a scholarly way. When I became a graduate student at GW, I was still very committed to the project, but I wasn’t sure what my method would be. I took an extraordinary seminar with Robert McRuer, which was all about cutting edge interventions in queer theory, and I remember being very transformed and galvanized in that seminar, and it led me to realize that queer theory was going to be one of the primary nodes of intervention that I was going to make in this project, one that had not been done with the object of superhero comics. So, little by little I developed this project, and in graduate school it kind of took shape theoretically, and that was kind of the genealogy of the project.

Truly, I was lucky to have undergraduate mentors who said, you know, “go ahead,” and then to work with graduate mentors who said, “if you’re going to run with this project, let’s make it as precise, as theoretically innovative, as possible.” I think that’s part of the reason that the book has gained so much traction, even before its publication, is because the people I worked with knew that I knew that it wasn’t merely a history of comics, but rather about locating superhero comics in this larger conversation about liberal and radical politics in the post-war period. So that’s been my broader commitment.

In that project, are there particular scholars whose work has been really helpful for you?

Absolutely. I’ve said this many times, but I think a really transformative moment for me was when I read the work of Julia Mickenberg in Learning from the Left. I think Julia modeled for me what it mean to take a particular object, in her case children’s literature, and place it in this really deeply elaborated and thickly researched network of relationships. She not only thinks about children’s literature as a text, but also its relationship to its creators, its producers, its sites of circulation, and then to the broader political context in which it was circulated. So that allowed me to think about an object that was similarly denigrated or thought of as kind of escapist, meaningless, not intellectually worthy, and, instead of thinking of it that way, to actually place it in a context. I also think the work of people like Christina Kline and Melani McAlister, in Cold War Orientalism and Epic Encounters, also do really extraordinary interdisciplinary work in talking about the relationship of political theory and policy to cultural production. Those are some of the books I feel most moved by in American Studies.

I also have to say that, over the course of this project, I was so galvanized not only by queer theory, but also by the uptake of political theory in queer studies. I read some unusual work that would not normally fit into this realm; I read a lot of work by people like Hannah Arendt. I read the work of political theorists like Linda Zerilli, sociologists like Debbie Gould writing about ACT UP and its radical politics, and I read an unbelievable range, in addition to the comic books themselves, of actual primary sources from the radical politics of the sixties and seventies; the Port Huron statement, the radical statements of women’s liberation, gay liberation. All of these together allowed me to see that comic books were not merely entertainment, they were a way to theorize politics and people’s relationship to public life through fantasy figures. I love being able to engage a broad range of work that normally wouldn’t be thought of as political theory. Those thinkers were really central to me.

And I’ll admit to you something that really blows my mind: when I look back it, I read something like 3,000-4,000 pages of comics for every chapter that I wrote. And I wrote seven chapters. I would not only read and reread the actual thing that I was going to look at, let’s say The Fantastic Four or Green Lantern/Green Arrow, I would read many comics that were coming out at the same time, and the political discourse of that moment. So I tried to invest comics in this kind of wider language that’s going on. I was influenced from many, many different directions.

I was going to ask you a question about interdisciplinarity, but you’ve already answered it…

I’m actually happy to elaborate on that, if you want to talk a little bit more about it.