Last week, I introduced a collaborative project that I’ve been working on for the past few years, Mystery Spot Books. This week, I submit another bit of writing from our first book, Mystery Spot Vol. 1, on buried cars in Tulsa and hydrogen bombs hiding in plain sight in New Mexico. 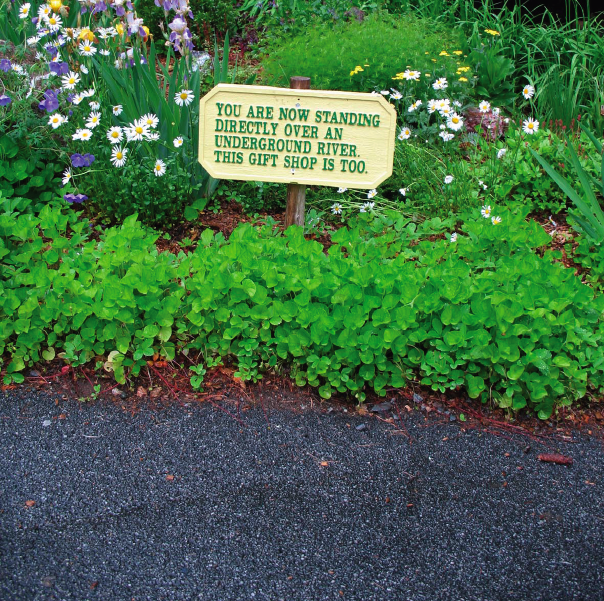 Sandia Base was a field test area for nuclear weapons run by the U.S. government that operated from 1946 until 1971. The former test site lies southeast of Albuquerque amidst a seemingly unbroken expanse of dry mesas and their tributaries of dusty roads. In May of 1957, at what is now called the Mark 17 Broken Arrow site, a 42,000-pound hydrogen bomb fell through the closed bay doors of a plane that was approaching Kirtland Air Force Base to the south. The plutonium pits were safely stored on the plane, but radioactive pieces of the bomb were scattered across the mesas. In 1996, the Center for Land Use Interpretation placed a descriptive marker at the site to commemorate the incident. The marker is a wooden post that stands in the middle of a field and holds a plaque describing the 1957 event. The Air Force cleaned up the site in secret, but if you visit the Mark 17 Broken Arrow site today, you can still find radioactive pieces of the hydrogen bomb hiding in the sagebrush.

Six hundred and fifty miles east of the Sandia Base, also in 1957, the city of Tulsa buried a brand new Plymouth Belvedere in an underground bunker designed to withstand nuclear fallout. The car was a time capsule, slated to be unearthed during Oklahoma’s centennial celebration in 2007. The concrete enclosure was intended to protect the car from decay, but a defect in the design of the bunker allowed water to seep in over the years and severely damage the Belvedere. A second car, a Plymouth Prowler, was placed in an above ground vault in 1998 and will be sealed there until 2048. If you visit Tulsa in 2048, you might see a well-preserved 1998 Plymouth Prowler emerge from its sepulcher, or perhaps a design flaw will allow time to do its work on this time capsule as well.

Some things get buried so no one can find them; some things get buried so everyone remembers them. But things don’t always stay buried. What you find if you visit the Broken Arrow site or Tulsa, Oklahoma, is more than the radioactive scraps of a destroyed bomb or a bizarre representation of local pride. One way or another, things come to the surface, and what is revealed when they do is not simply the contradiction between what we hide and what we honor, but the fact that the latter is often a mask for the former.

Dr. Randy Lewis has a new piece over at Flow that questions why it is so difficult to imagine unplugging from the constant buzz of electronics that characterizes modern life:

Yet… are we not curious about how it would feel to experience the “great unplugging”? Would we relish the ensuing silence as we restore the old ways of communicating and connecting with one another? Or would we lapse into a languorous funk without Google and HBO, Avatar and Annoying Orange? Would we feel permanently stuck in the isolation tank of our own boredom, marooned with the hideousness of our own organic thoughts? Would we start sketching the “Real Housewives” on the walls of our condos in crayon, breathlessly narrating their erotic adventures like an ancient bards singing the tale Odysseus and the sirens? Would we pine for our iPhones, laptops, and flatscreen TVs like postmodern amputees cursing the loss of our cyborg appendages? Would we grieve for our machines?

Probably. But what fascinates me is how loathe we are to even imagine this scenario. We are increasingly unwilling to contemplate the absence of the various screens that convey so much of our entertainment, sociality, and labor. Like Francis Fukuyama’s Cold War “End of History” argument in which capitalism’s apparent triumph over socialism foreclosed any discussion of alternatives, the new media juggernaut is so powerful that it has blotted out our ability to imagine anything else. We are all hopeless screenagers now.

END_OF_DOCUMENT_TOKEN_TO_BE_REPLACED

Somehow, it’s already December, and you know what that means: a million year-end lists of the best (and worst) 2011 had to offer. So we’re throwing our collective hat in the ring with this list of the best movies from 2011 that are of particular interest to American Studies scholars of all stripes. We can’t vouch for the  quality of all these, of course, but they at least provide some fodder for folks to potentially research and write about.

Quick note: there are a ton of worthwhile documentary films that were released this year that are worth a look, but this list only highlights fictional films. Have fun!

Ryan Gosling stars in this intense homage to a very gritty Los Angeles. He plays a Hollywood stuntman who moonlights as a getaway driver, but a botched heist leaves him with a contract on his head. Though the film’s storyline is predominantly a tale of the unnamed driver dealing with a variety of folks who try to kill him, Drive also offers a fascinating and dark portrayal of the city. Visually and musically, it’s 1980s-style noir at its best (but caveat emptor: the violence is sporadic but incredibly graphic).

END_OF_DOCUMENT_TOKEN_TO_BE_REPLACED

Here at AMS :: ATX, we’re – perhaps not surprisingly – huge fans of academic projects that engage with the digital realm in meaningful ways. We’re particularly excited by projects like the Archive of Childhood, which we featured last week, and other digital archives like these (among myriad others, naturally). Public access, multimedia, and interactivity all open up possibilities for innovation in research.

But what about digital academic work of a different sort – those that blend the creative and the scholarly on a digital platform?

END_OF_DOCUMENT_TOKEN_TO_BE_REPLACED

“Dear future generations: Please accept our apologies. We were rolling drunk on petroleum. – 2006″ – Kurt Vonnegut, from his Confetti project

Last month, Sara Reardon’s research, “Climate Change Sparks Battles in the Classroom,” based on interviews with 800 members of the National Earth Science Teachers Association, reported that “climate change was second only to evolution in triggering protests from parents and school administrators.” I read this finding while I was immersed in Saci Lloyd’s three YA books about climate change and energy troubles, The Carbon Diaries 2015, The Carbon Diaries 2017, and Momentum. As I’ve mentioned on my blog before, I’m in the very preliminary stages of research for a new project on the ways that American environmentalists have used “future generations” as an argument for acting to forestall environmental disaster; I’m also very interested in the ways that we tell these “future generations” about the problems we’ve caused, and whether, and when, these narratives amount to apologies. To me, Lloyd’s books feel like something sui generis: YA science fiction that addresses these issues of intergenerational environmental justice head-on.