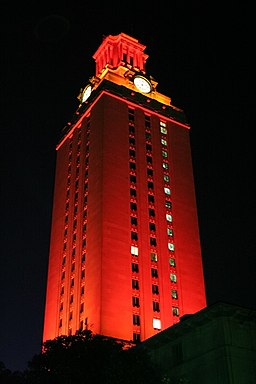 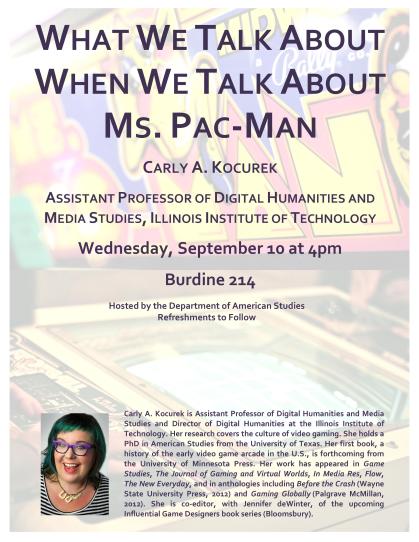 We’re thrilled that one of our recent Ph.D. recipients, Dr. Carly Kocurek (Illinois Institute of Technology) will be returning to the hallowed halls of Burdine to deliver a lecture about video game arcades. Please join us on Wednesday, September 10 at 4pm in Burdine 214 to hear more about her research.

A synopsis of her talk:

Over the past decade, the video game arcade has seen a small revival in the United States. Long-established arcades like New Hampshire’s Funspot have become destinations in their own right while new businesses like Austin’s own Pinballz and the growing number of bar-arcade hybrids scattered across the country draw a loyal, local clientele. This revival relies in part on a deep fascination with the video game industry’s early glory days. Arcades feature “classic” machines in meticulous repair or boast particularly exhaustive collections of rare games to distinguish themselves. In this talk, I excavate the nostalgia for the arcade’s “golden age” of the 1970s and 1980s and consider its position in contemporary narratives of American technological progress, entrepreneurship, and masculinity. Ultimately, I tie the nostalgia for classic arcades to multiple points of longing–for an imagined past that is defined by aesthetic style, by political positioning, by economic conditions, and by a particular kind of idealized young manhood.

Apparently we have quite a bit of publishing going on this month in the American Studies department. Last week, Carrie Andersen published a column for Flow about the joy that arises from discovering absurd videogame glitches, centering on a YouTube personality and gamer named Dopefish. We’ve posted an excerpt below, and the full article can be found here:

Unsurprisingly, videogame designers and coders have been concerned with creating virtual, realistic, immersive spaces where the glitch is similarly undesirable (although perhaps not as world-ending). As designer Toby Gard writes, “When we are creating worlds in games, immersion is only possible for the player if we can convince the players that the space is authentic (whether stylized or not.).” The code that underlies the videogame holy grail—the authentic, immersive gaming world—is demystified if a character or background looks warped in such a way that players no longer buy into the illusion.

In line with Gard’s concern with the immersive virtual space, media scholar Eugénie Shinkle describes how videogames ideally use sophisticated simulations to hide their intricate, sublime technological codes, but failure events—glitches—make these codes visible and thus rupture bonds between player and game space. Consequently, players can lose control, meaning, and their senses of self. The game shifts from being a virtual arena for exercising player agency and posthuman subjectivity back into a clunky object, as lifeless as any piece of furniture.

In all of these cases, glitches occupy a space on a spectrum that spans from the minor irritation to the colossal fuck-up. But constructing the glitch so negatively ignores the real pleasure that can arise from encountering a hiccup in the technological system. What happens when failure events, rather than provoking a loss of our post-human selves or the literal end of the world, instead evoke happiness?

Today, we feature some words of wisdom from Dr. Carolyn de la Peña, currently director of the University of California at Davis Humanities Institute and Professor of American Studies. Her books include The Body Electric: How Strange Machines Built the Modern American (2003)  and Empty Pleasures: The Story of  The Story of Artificial Sweeteners from Saccharin to Splenda (2010). She graduated with a Ph.D. in American Studies from UT in 2001.

Right now I oversee a large staff and work on grant proposals and events and am an advocate for humanities funding and research. In my own research I’m looking for ways that I can work with scientists and nutritionists on questions of health, technology, and the body. So much of my brain space is taken up thinking about the humanities at large–all of the disciplines and interdisciplines that comprise it and how it differs in important ways from the sciences and social sciences. I didn’t do these things at UT in our smallish program. At UT I was very interested in defining American Studies (what are our methods? why can’t we have a real theory class? how are we different then NYU?). I really wished that the program would give me more direction–have a more “inky” stamp to put on my work and my approach. Now I’m less interested in defining AMS, or worrying about whether my work fits in American Studies, and more interested in just being a humanist and working with different methodologies depending on the research or administrative problem I’m tacking.

END_OF_DOCUMENT_TOKEN_TO_BE_REPLACED

Dr. Randy Lewis has a new piece over at Flow that questions why it is so difficult to imagine unplugging from the constant buzz of electronics that characterizes modern life:

Yet… are we not curious about how it would feel to experience the “great unplugging”? Would we relish the ensuing silence as we restore the old ways of communicating and connecting with one another? Or would we lapse into a languorous funk without Google and HBO, Avatar and Annoying Orange? Would we feel permanently stuck in the isolation tank of our own boredom, marooned with the hideousness of our own organic thoughts? Would we start sketching the “Real Housewives” on the walls of our condos in crayon, breathlessly narrating their erotic adventures like an ancient bards singing the tale Odysseus and the sirens? Would we pine for our iPhones, laptops, and flatscreen TVs like postmodern amputees cursing the loss of our cyborg appendages? Would we grieve for our machines?

Probably. But what fascinates me is how loathe we are to even imagine this scenario. We are increasingly unwilling to contemplate the absence of the various screens that convey so much of our entertainment, sociality, and labor. Like Francis Fukuyama’s Cold War “End of History” argument in which capitalism’s apparent triumph over socialism foreclosed any discussion of alternatives, the new media juggernaut is so powerful that it has blotted out our ability to imagine anything else. We are all hopeless screenagers now.