Today we feature some words from Bob Byington, who pursued a career in film after graduating with an MA in American Studies. His films have screened in theaters and festivals nationwide, including our own South by Southwest. His most recent film, Somebody Up There Likes Me (2012), stars Nick Offerman, Keith Poulson, and Jess Weixler and was filmed right here in Austin. 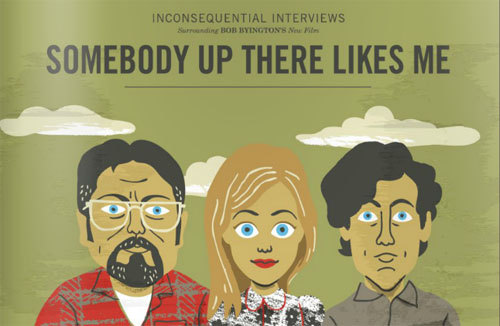 Bill Stott, who was my primary mentor at UT, let me make a movie for the Doc. class he was teaching, and that got me started on the whole idea of trying to make a movie instead of being fascinated by watching them.  And I was able to take RTF classes as a kind of cross-discipline thing.

The facilities and resources at UT are astounding. Professors work for the students, tho’ it’s not set up to seem that way. And the equipment you have access to as an American Studies grad. student, that’s sitting in the RTF building — even when I was there in the early ’90’s it was great, and now it’s obviously way better…