The Sexing History podcast, co-written and co-hosted by UT AMS Assistant Professor Dr. Lauren Gutterman, as well as Dr. Gillian Frank, has a new episode: “Let’s Dance!” You can listen to the episode here.

We are very pleased to announce A Princess Out of Place: Guinevere in BBC’s Merlin And Dark Fantastic Dreaming, a talk by Dr. Ebony Thomas, to be held on Friday, April 28th at 3:30 PM in CLA 1.302E. We have included a description of the talk, below:

Few recent fandom and social media reactions have equaled the objection to Angel Coulby being cast as Gwen, the servant girl who would grow up to become Queen Guinevere, on the BBC’s most recent televised adaptation of Arthuriana, Merlin. The presence of a Black woman as the eventual love interest of the main character was a source of continual controversy throughout the entire run of the series. Just as with other Black female characters in adapted and transmediated youth literature, such as Bonnie of The Vampire Diaries, and Rue in The Hunger Games, viewers had a very difficult time suspending their disbelief. This audience difficulty, created through lifetimes of reading and viewing narratives of the fantastic where the Dark Other is locked into place, was complicated because unlike most other Black female characters, Gwen does not die, but outlives her king and husband. In my book manuscript in progress, I have theorized the dark fantastic cycle that occurs as the Dark Other shows up in speculative fiction. What, then, happens if a diverse character does not go through the full cycle of spectacle, hesitation, violence, and haunting? How does its interruption complicate the narrative? How might it confuse – and frustrate – audiences?

We hope to see you there.

Bakelite was the first totally artificial material with molecules previously unknown in nature. Invented in 1907 by Leo Baekeland, a Belgian émigré chemist, the new material immediately became indispensable for hidden electrical components of such new technologies as the automobile and radio. More to the point, as the first of many new synthetic plastics and polymers, Bakelite contributed to the expanding consumer culture of the 20th century by placing an infinite range of inexpensive, easily molded goods within economic range of ordinary citizens. By 1967, the cultural significance of synthetics such as Bakelite had become so powerful that movie audiences exploded when Dustin Hoffman in The Graduate was told, “Plastics… just one word… there’s a great future in plastics.”

Congratulations to Dr. Janet Davis, who recently had a short history of the Ringiing Brothers and Barnum and Bailey circus published by Zócalo Public Square, which was then picked up by the Smithsonian. We’ve included an excerpt, below.

On ‘Circus Day,’ huge crowds gathered to observe the predawn arrival of “herds and droves” of camels, zebras, and other exotic animals—the spoils of European colonialism. Families witnessed the raising of a tented city across nine acres, and a morning parade that made its way down Main Street, advertising the circus as a wondrous array of captivating performers and beasts from around the world.

For isolated American audiences, the sprawling circus collapsed the entire globe into a pungent, thrilling, educational sensorium of sound, smell and color, right outside their doorsteps. What townspeople couldn’t have recognized, however, was that their beloved Big Top was also fast becoming a projection of American culture and power. The American three-ring circus came of age at precisely the same historical moment as the U.S. itself.

Three-ring circuses like Barnum and Bailey’s were a product of the same Gilded Age historical forces that transformed a fledgling new republic into a modern industrial society and rising world power. The extraordinary success of the giant three-ring circus gave rise to other forms of exportable American giantism, such as amusement parks, department stores, and shopping malls.”

Dr. Davis followed that up last week with a second op-ed, published at the Washington Post. We have another excerpt, below:

Since Ringling Bros. announced its closure in January and the Big Apple Circus filed for bankruptcy last year, cultural observers have issued grim prognostications about the death of the American circus. “Without sugarcoating it, let’s accept the fact that the circus will not survive our generation unless the state comes to its rescue,” journalist Preetam Kaushik wrote for the Huffington Post. Author Naomi Schaefer Riley opined on “what the death of the circus means for today’s kids.”

The advance postmortem is nothing new. On July 16, 1956, Ringling Bros. performed its last show under a canvas tent, deciding to move to indoor arenas to reduce its labor force and transportation costs. The New York Times observed, “The big top, furled forever, started its funeral ride today.”

But the impending death of the circus has been greatly exaggerated. Although the biggest productions have had trouble attracting the large audiences they need to support themselves, smaller circuses are flourishing. Cirque du Soleil, the highly profitable Montreal-based one-ring show, is expanding in the United States. Other one-ring shows, such as Circus Flora and the Culpepper & Merriweather Circus, are still going strong. As a bellwether of the future, youth circuses are booming. According to the American Youth Circus Organization, there are 250 circus education programs nationwide, with growth projected at 10 new programs per year.

It’s been a busy few months for Dr. Davis, who earlier this year published an op-ed on CNN.com. You can read it here. 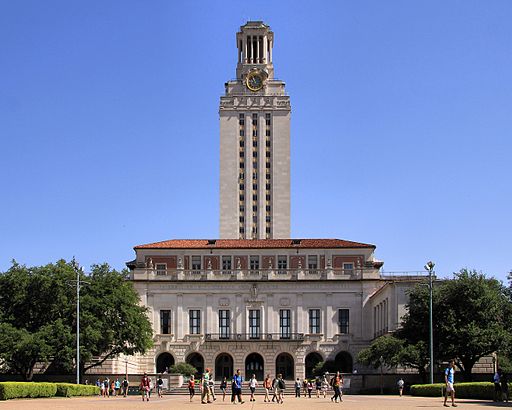 Last month, Dr. Chris Newfield came to UT to deliver a lecture as part of the department’s “History and Future of Higher Education” class, team taught with Rich Reddick in Educational Administration and Kate Catterall in Design. This experimental, multidisciplinary, collaborative course has addressed pressing problems and issues in higher education over the course of this semester. For more information about the course, you can listen to this interview with the three professors on KOOP radio.

Senior Cole Wilson offers this tremendous write-up of the event, which emphasized the troubling relationship between privatization and higher education.

Dr. Christopher Newfield came to the University of Texas as a guest of the American Studies Department and of the course instructors behind the History and Future of Higher Education class. His work in the critical university studies field spiked the interest of Dr. Julia Mickenberg, Dr. Richard Reddick, and Dr. Kate Catterall who jointly invited Dr. Newfield to discuss his upcoming book, The Great Mistake: How Private Sector Models Wreck Universities – and How We Can Reconstruct Them. Dr. Newfield is currently a professor of literature and American Studies at The University of California at Santa Barbra where he has worked closely with the school’s budgetary and planning committees respectively.

Dr. Newfield’s lecture focused on four major issues in higher education: the continued need for more funding in public universities today, the prioritization of STEM fields over the liberal arts, fine arts, and natural sciences, the newfound notion that Bachelors Degrees are a private good, and the privatization of industry-university partnerships. He proceeded to elaborate on these issues, arguing that universities have begun to embrace a market based model where costs rise continuously, causing student debt to rise in cadence. This has pinned a hefty price tag on the contemporary Bachelor’s Degree, turning it into a perceived private good and marginalizing innovation due to cost.

He went on to argue that the partnerships between private corporations and universities that are forged in a relationship where research exits the university through the private sector and produces income from patented ideas do not give back to the research producing university. He stated that this broken relationship has forced price increases across universities as impotence is continuously placed on costly research in the STEM fields with no substantial income to match the financial output.

While Dr. Newfield did not believe philanthropic donations to be a valid cure to what he called “cost disease,” he argued that a revolution in the classroom and a counter to the STEM field would. Tailored or “personalized” instruction would halt marginalized innovation caused by cost increases. He countered STEM’s dominance by suggesting collaboration across disciplines in the class room advocating for the construction of hybrid classes much like the Future and History of Higher Education.

Opposed to a reliance of donations as I suggested, Dr. Newfield argued that the injection of non-commercialized technology into all aspects of a university, especially the liberal arts, social sciences, and natural sciences would bolster innovation and result in greater income equality within the university.

Finally, Dr. Newfield countered the notion that a Bachelors Degree is a private good by charging the owners of those degrees with the duty of explaining and expressing the societal value of their degrees whenever applicable. In short, Dr. Newfield demands a culture change led by those with degrees.

For a complete taping of Dr. Newfield presentation, visit the Texas Learning Sciences’ Vimeo page here. Look out for his next book coming out later this year, or check out some his previous works like Unmaking the Public University: The Forty-year Assault on the Middle Class.