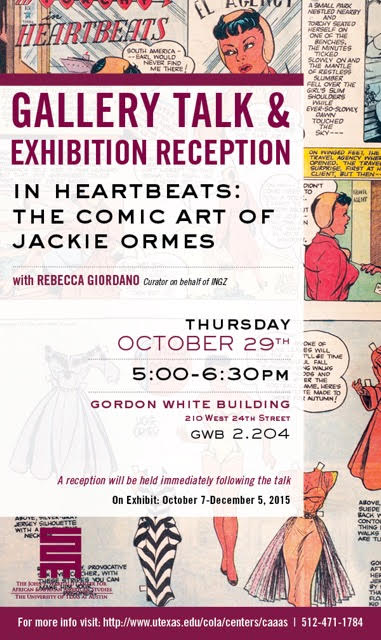 On Thursday in GWB 2.204 beginning at 5:00 PM and running until 6:30 PM, there will be a gallery talk and reception for In Heartbeats: The Comic Art of Jackie Ormes, a show curated by Rebecca Giordano on behalf of the INGZ curatorial collective, of which our own Natalie Zelt is a member. Featuring “selections from four comic series by the first African American woman cartoonist, Jackie Ormes,” the show tracks the cartoonist’s career “beginning in 1937 in the Pittsburgh Courier,” and displays a selection of her “irreverent and witty comics tackling major cultural events in newspaper comics that centralized the experience of African American women. From the House of Unamerican Activities to segregated train cars that enabled the Great Migration, Ormes’ vivacious and intellectual characters countered pervasive stereotypes with images of stylish, self-driven, and savvy women of color.” We spoke to Giordano about the thoughtful and exciting show earlier this week, and will run that interview in the next few days.