The week of good news continues here at AMS::ATX! Congratulations are due to our very own Dr. Julia Mickenberg, who recently published an article, “Suffragettes and Soviets: American Feminists and the Specter of Revolutionary Russia” in the Journal of American History. 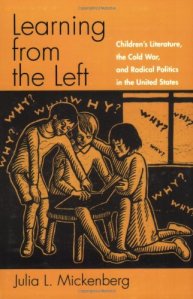 Dr. Mickenberg’s 2006 book, which won the Grace Abbott Book Prize from the Society for the History of Children and Youth and the Children’s Literature Association’s Book Award, among others

Here is a taste of the article, which considers the importance of Russia in the struggle over suffrage in the United States:

Russia became a crucial foil in the battle over woman suffrage. As a product of the first revolution inspired by socialism, “new Russia” came to represent the very notion of internationalism. Thus it loomed large for many progressives, including feminists, whose struggle was “decidedly internationalist” in orientation—and closely associated with socialist agitation—beginning around 1890. Russia served as a powerful framing device for considering the nature of women’s citizenship in the United States, for reasons specific to Russia’s gender politics and its place in the U.S. imaginary. For a significant number of American women—few of whom could rightfully be called Bolsheviks—the Russian revolutions in 1917, and the “new Russia” that emerged from them, became touchstones for a cosmopolitan, social democratic vision of female citizenship in the United States that encouraged American feminists to set their sights well beyond suffrage. A belief that Russian revolutionaries were taking practical measures to transform women’s place in society opened space for American feminists to conceive a new model of citizenship that encompassed not simply political rights but also social rights, economic security, and, to use the philosopher Etienne Balibar’s formulation, a new kind of subjectivity that results from being citizens rather than subjects.

For those of you with access to journals through a library website, check out the full article here.