In this second installment of “What I Did on My Summer Vacation,” AMS Department Chair Dr. Stephen Hoelscher shares his experience biking with UT undergraduates during the “Memory and the City” Maymester program in Vienna, Austria. Please enjoy Dr. Hoelscher’s photo essay “Bicycling in Vienna: Toward a Velo-Centered Sense of Place.”

“The bicycle was a collaborator in my reading of the city, of territory crossed and crisscrossed, of backwaters explored.”

When encountering a new city, I can think of no better way to get around than on a bicycle: you can cover a lot of terrain quickly, but you are still embedded in the landscape. For art rock icon and avid urban cyclist David Byrne, part of what makes biking through a city so great is how you visualize the places you’re riding through: “faster than a walk, slower than a train, and slightly higher than a person . . . one gets a perfect view of the goings-on in [a]town.”Time and space compress as you traverse great expanses, and yet the theater of social life that makes cities so wonderful, so unforgettable, is everywhere evident. You run into all sorts of stuff that you had no idea was happening—parades, carnivals, social gatherings, protests. You see entirely new neighborhoods, new parks, new housing units, new stores and theaters, even though those “new” places may be hundreds of years old.“Forget the damned motor car,” urban theorist Lewis Mumford once pleaded,“and build cities for lovers and friends.” The cities I like best are ones that are built for lovers and friends to ride their bikes through, without worrying about where to find a parking spot, and that encourages them to stop and enjoy each other’s company. 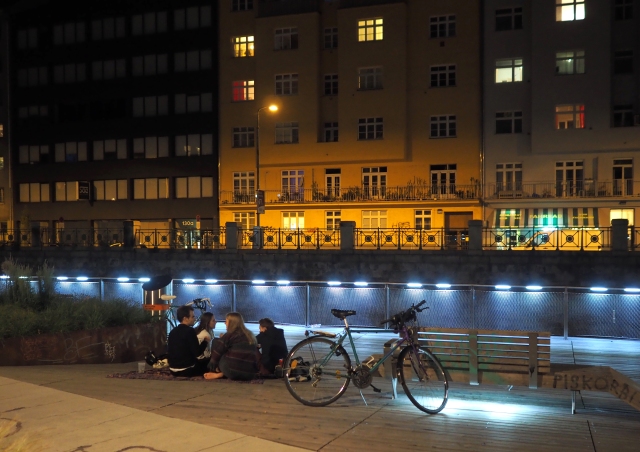 Vienna, Austria, is one such city. The infrastructure for all kinds of transportation, including bicycles, is impressive. One recent study found Vienna to be the 9th most bike-friendly city in the world, and I believe it. There are bike lanes everywhere, more than 1,300 kilometers throughout the city, many of which are protected from automobile traffic. People ride their bikes everywhere: to the opera, to work, to a favorite park, to bakeries and grocery stores, to soccer games, to school, to wine taverns. Equally important is the hard-to-define cultural sensibility that has made riding a bicycle more of a way of life than simply a mode of transportation. A velo-centered sense of place permeates the city.

Most summers, since 2007, I’ve had the good fortune of teaching an American Studies course in Vienna. Every year—except one—I’ve brought a bicycle. Like the British novelist and psychogeographer Iain Sinclair, for me the bicycle is a collaborator in my approach to making sense of cities. Each morning, I traverse Vienna, scouting out new places for our class meetings and looking to see whether the places I know well have changed. This is important logistical work since our class meetings are comprised of field trips to different sites that we’re studying. My pedagogical approach comes directly from my training in geography,with fieldwork built into the discipline’s DNA. I ask myself: why show PowerPoint slides about, say,the Karl-Marx-Hof social housing project, or a Nazi-era anti-aircraft tower,when we can conduct our class in those locations? Often,I get sidetracked, and explore backwaters that I had no idea existed.The bicycle might be the same one that I ride in Austin, but everything about the experience seems different, including the food that I eat along the way.

Over the years, and with only a modest amount of encouragement, students have also discovered their own velo-centered senses of place. Many have made use of the excellent City Bike program.One student, in 2009, purchased a vintage steel-frame Colnago racing bike at the local flea market. And another, in 2015, even learned how to ride a bike, never having done so before.

What happened this summer was a little unusual. Toward the end of our month-long course, a couple students approached me about leading a group bicycle ride for the entire class. I was immediately interested, of course, but also concerned about potential logistical and safety issues. Thankfully, riding bicycles(unlike skydiving and automobile driving) is not on the International Office’s prohibited-activities list.I was also hesitant because I didn’t want any student to feel left out if they didn’t have the ability to ride for a couple hours. On the bus ride back from our weekend in Salzburg, I asked every student individually if they would be interested in such an activity; much to my surprise, everyone responded affirmatively and with great enthusiasm. To the question: “Fährst du rad?,” each replied: “Ja, gern!”

So, our penultimate evening in Vienna included a bike ride. The intensive work of the course—the lenghty readings, field excursions, field note writing, research presentations, dailyGerman language classes—was nearly complete, so the timing seemed right. As a route, I chose the Donauinsel (Danube Island). Closed to automobile traffic, the 21-kilometer-long island serves as an important urban greenway in the heart of the city. The island—constructed in the 1970s and 1980s as part of a flood control effort—cuts the Danube river in two sections. The wider (western) section is the main portion of the river and serves as the navigation channel for enormous tourist ships and cargo vessels. Free of motorized vessels, the narrower (eastern) channel—the Neue Donau (“New Danube”)—was constructed with the development of the Donauinsel and serves as an enormous swimming pool. Today, some thirty years after its creation and well connected to the city’s public transit system, the Donauinsel is a massive urban park, with sports fields, barbeque equipment,sun bathing areas, floating rafts, playgrounds, and the world’s largest music festival (unlike ACL, it’s free). 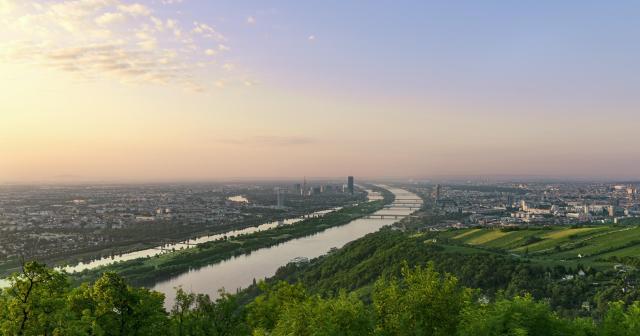 And bicycle paths. Crisscrossing the island, the more than 50 kilometers of Donauinsel bike paths proved to be ideal. With the assistance of Fahrradverleih Copa Cagrana—a bicycle rental place adjacent to our subway stop—my students and I were outfitted with turquoise blue city cruisers. After getting everyone set up, we slowly took off, meandering up stream. One could almost hear Freddie Mercury sharing in our adventure:

Before my eyes, college students were transformed. Some were reconnecting with nearly forgotten younger selves of when they loved riding bikes. Others were experiencing velo-exhilaration for the first time. We rode slowly, to enjoy the moment and so that no one felt pressured to keep up. I kept riding to the front and then to the back of our mini peloton, making sure that everyone was doing alright. The view, which I tried to photograph as best I could, approximates the atmosphere, but doesn’t quite capture the frolicking scene. 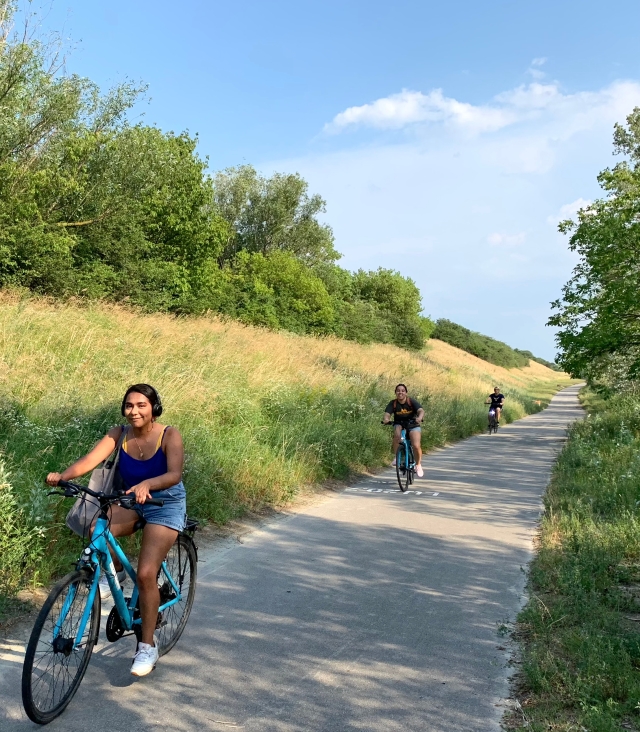 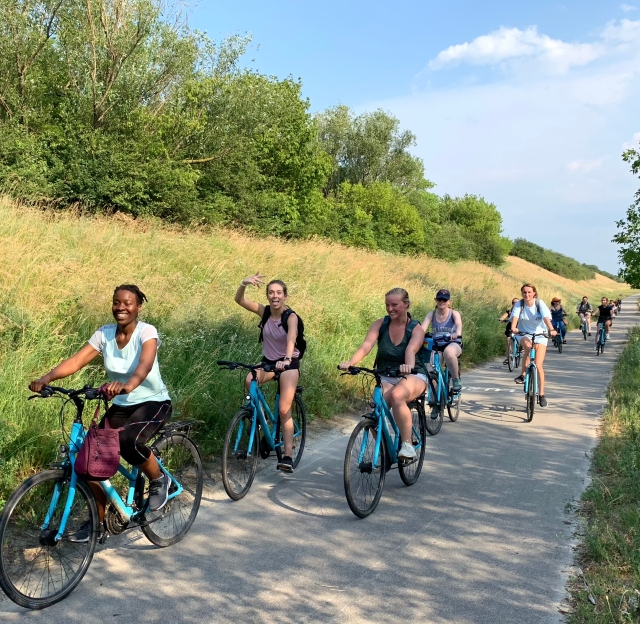 We rode to the Anfang der Donauinsel, the point where the Danube Island begins, and stopped for a group photograph. It’s one of my favorites. 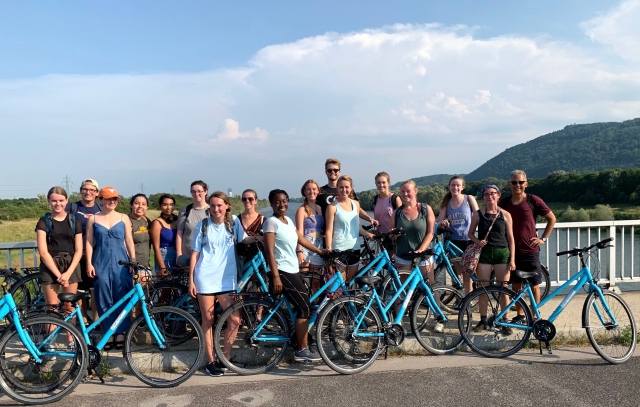 On the way back to Fahrradverleih Copa Cagrana, and our not-quite-farewell dinner, we stopped for a swim. One of the students had the brilliant idea of bringing sidewalk chalk. And so for the better part of an hour, University of Texas students swam in the cool (if not exactly Blue) Danube. They made art that tagged their presence, that tried out some of their new German language, and that expressed their feelings about living and studying abroad. And they swapped stories about life back in the U.S. and how it differs from the city that had become home. The conversations continued well into the evening, long after we returned our bicycles and had dinner together. 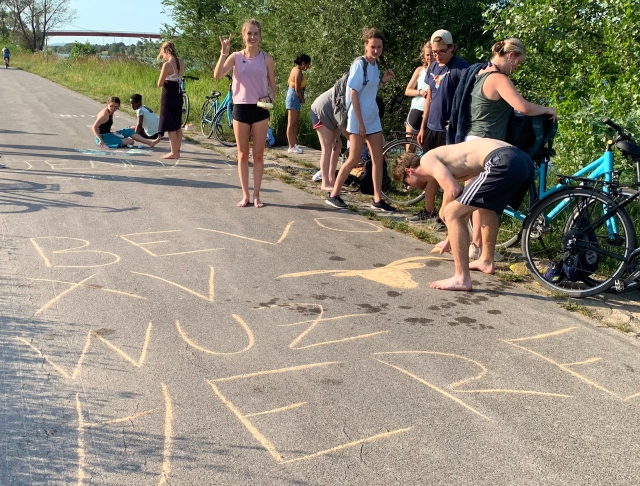 As a way to wrap up a course, to help students see and experience the world in a new way, cycling along the Donauinsel proved enormously successful. I think it was especially impactful for those students who did not consider themselves “athletic” or who had not ridden a bike in years. Pretty much every student told me how much they enjoyed the ride, and one wrote after the conclusion to our class: “that bike ride was one of the best experiences of my LIFE.”As for me, I count myself among the most fortunate of working people. When your job feels like summer vacation, and when others find your commitments—in this case, a velo-centered sense of place—worth sharing, you’ve found a winning combination.

For more information about Steven Hoelscher’s Vienna course, including comments from students who have taken it, see the course website.