As we announced earlier this school year, the Department of American Studies has chosen a theme that will create common threads among course offerings, discussions, and departmental events throughout the 2012-2013 school year. The theme for this year is Dream!, and we are very pleased to announce that over the coming weeks, we will be highlighting some of the ways instructors have integrated this theme into their classes. 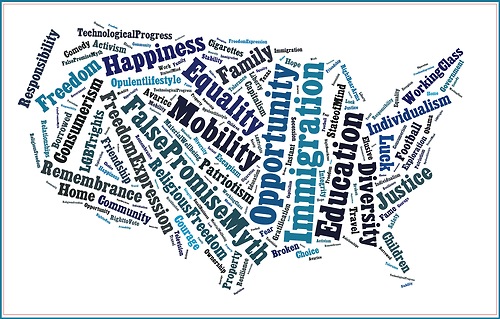 A word cloud of themes from the Postcards from Texas project.

To start things off, we would like to present Postcards from Texas, a  project of Dr. Steven Hoelscher’s Fall 2012 Introduction to American Studies class. The Postcards project is a blog that features photographs and text created by students that reflect on the concept of the American Dream and what it might mean today.

The following description of the project comes to us from the Postcards website:

The idea of the “American dream” means many different things to different people; it could hardly be otherwise in a nation as diverse as the United States. For some, the dream is about intangible ideas like freedom of expression, freedom of religion, optimism, family ties, social justice, and equality. While for others, it has long been associated with attaining a higher standard of living, especially one that surpasses that of previous generations. What’s more, different people may express and experience the “American dream,” however defined, in very different ways. Finally, it’s also the case that, at different times and in different ways, the “American dream” was not available to everyone in the country; for some it might be technically available, but in practice as distant as the moon.

Undergraduate students in Prof. Steven Hoelscher’s Introduction to American Studies class at the University of Texas at Austin took on the task of interrogating this nebulous, but important concept in a two-step project. Beginning with the inspirational model of Magnum Photos ongoing Postcards from America series, students were asked to explore one segment of the U.S. visually, through photography. First, each student asked him/herself what the “American dream” might mean and if it’s something attainable or hopelessly inaccessible. Then, each recorded her/his thoughts in the form of a photographic image in Texas. In these original photographs—and in the detailed, unedited captions that accompany them—the extraordinary range of how the “American dream” is envisioned comes into full view.

We invite you to take a closer look at the Postcards from Texas site, which is a wonderful archive of some of the many meanings of the “Dream” today.

2 comments on “Dream! Postcards from Texas”